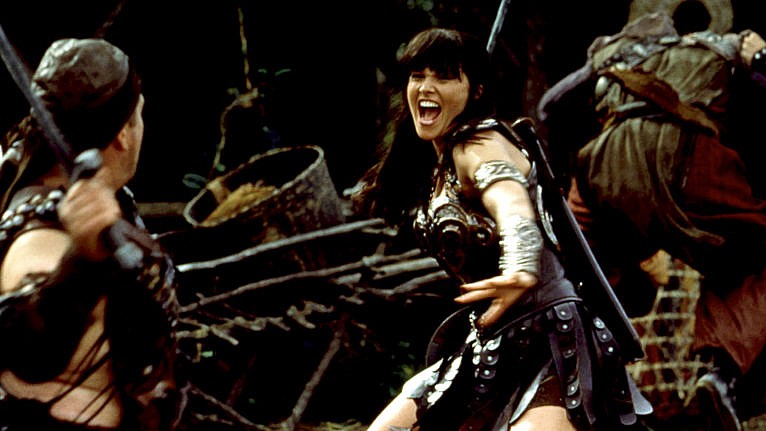 Kai Cheng Thom: Lucy Lawless’s Xena showed me a way to be feminine, and at the same time strong, fierce and unstoppable

I recently changed my cellphone ringtone to Joseph LoDuca’s The Warrior Princess, the once-iconic leitmotif from the television show Xena: Warrior Princess. I know, I know, custom ringtones are considered horrifically cringe-worthy in 2022, but I can’t help myself. In the past month, I’ve binge-watched the first four seasons of Xena, comprising 90 45-minute episodes in total, and I’m staring down the barrel of the last two seasons with feverish anticipation.

It’s the slow-motion end of the world, and all I want to do is watch Xena kick some warlord butt. Well, that and I want to be Xena, so much so that I’ve started doing kickboxing workout videos again. Oh, yes, I am in deep, immersed in an obsession I first emerged from 20 years ago, as a preteen. I have to wonder: why Xena? Why now? But perhaps I am getting ahead of myself.

For those not familiar with the mythos of the Warrior Princess, Xena originated as a spinoff of the similarly kitschy adventure series Hercules: The Legendary Journeys, in which she is a villain, the despotic warlord known as the Destroyer of Nations. Reformed by Hercules, Xena went on to star in her own show, in which she fought to atone for the atrocities she committed in the past and conquer her own bloodthirsty nature.

READ: My obsession with a serial liar

The series is set in ancient Greece, a time of gods and kings in a land in turmoil that cried out for a hero. In the ’90s, I was an effeminate, closeted little Asian trans girl, and I too longed for a saviour—from the constraints of masculinity, my parents’ expectations and my own deeply ingrained shame and helplessness in a world where being queer was considered a sick joke at best. Fortunately, a vision in a corset and miniskirt came to answer my prayers: Kiwi actress Lucy Lawless in the role of Xena, the Warrior Princess. Wielding sword and chakram (the razor-sharp metal frisbee she threw at her enemies) and belting an ululating battle cry, Xena burst onto the screen to battle the forces of evil, take sexually ambiguous baths with her sidekick, Gabrielle, and rescue me from all other models of femininity.

People don’t talk much about Xena anymore. Unlike her ’90s woman warrior contemporary, Buffy the Vampire Slayer, the Warrior Princess never achieved prestige television status. Though the show was, for a time, ubiquitous, Xena wasn’t known for carefully crafted storylines or sophisticated world-building. Instead, Xena was a campy (and at times nonsensical) assemblage of high melodrama, slapstick comedy, historical anachronism and extremely cheesy—but still thrilling to this then eight-year-old fan—action scenes.

READ: In a comedy about queer South Asian identity, a yogurt pot can be more than a pot of yogurt

Though it was lost on me at the time, there was also copious pandering to the heterosexual male gaze; I’m not sure there’s a single female character whose costume isn’t essentially a metal corset, leather swimsuit or some combination thereof. Yet the gratuitous nature of Xena was complicated by its forays into queer female sexuality, which in retrospect seem shockingly bold for prime-time television of that decade. The entire six-season enterprise is tied together by Lawless’s electric performance: she snarls, seethes, broods, whoops and cackles in the heat of battle with such fervour that it’s impossible not to read female empowerment into her character, no matter what ridiculous thing she’s wearing.

This is where my obsession with the Warrior Princess began, in her expression of a femininity that spoke to my own repressed and oppressed gender. I remember insisting to my parents that I was a girl as early as three years old, yet I was never really aligned with the sort of post-feminist Barbie doll aesthetic that was so heavily promoted to little girls in the early ’90s. I knew I was a girl, I felt it in my soul, but I also wanted to be strong, fierce and unstoppable—like Xena. And like Xena, I was full of shame. Like Xena, I was full of rage.

These days, there is much debate about the tone and intensity of trans-rights activism. Famed author J.K. Rowling has described receiving “accusations and threats” from trans activists and being subjected to a “persistent low level of harassment” in response to some of her engagement on social media related to transgender issues. In his recent special The Closer, comedian Dave Chappelle defended Rowling, describing the trans community as “mad as s–t” and declaring himself to be on “team TERF.” While I don’t think it’s true on the whole that trans activists are threatening or overly emotional, I also have to ask—what if we are indeed angry? What if I, a trans woman, am furious? What if I, like so many trans people my age and older, spent decades living in secrecy and shame, derided and denigrated, under the constant threat of violence from both strangers and loved ones for expressing the truth of what I am? Who wouldn’t want to raze a few villages?

I work as a conflict resolution consultant and mediator. I literally wrote a book about choosing love in response to hatred and violence. Yet something within me still yearns to strap on some armour, grab a sword and scream a bloodcurdling war cry—and look good doing it. Like Xena, I contain contradictions. I want to overturn this wretched, oppressive world, and heal it at the same time.

Is there room in this world for a trans woman to be angry—to be a warrior—and still deserve to be called a woman?

Twenty years later, Xena still makes me hope there is.

This article appears in print in the February 2022 issue of Maclean’s magazine with the headline, “I am woman (also, warrior).” Subscribe to the monthly print magazine here.