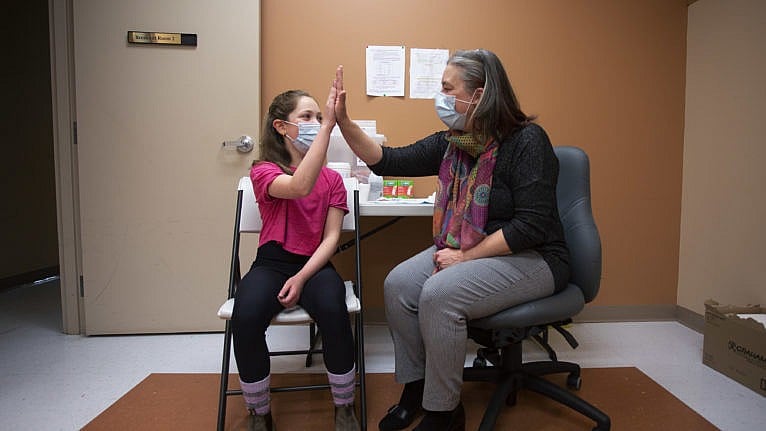 Clear communication, speedy mobilization and a culture of vaccine acceptance has helped the province get first doses to more kids than any province or territory

When it comes to getting COVID-19 vaccines into the arms of the 5-11 crowd, there is one clear winner among Canada’s provinces and territories: Newfoundland and Labrador. Since vaccination efforts started across the nation for that cohort at the end of November, the province has built an almost insurmountable lead: to date, it has given first doses to 74.7 per cent of all children ages 5-11, well above the rest of pack—Nova Scotia is second at 61.4 while Quebec has third place at 57.4—and a whopping 26 percentage points above the national average of 48.3 per cent.

What is the secret to Newfoundland and Labrador’s success?

For one, the province has had a focused public health communications strategy, led by its chief medical officer of health, Dr. Janice Fitzgerald. “She’s consistent, she’s clear, she is an excellent communicator to the public, she’s honest,” says Dr. Natalie Bridger, a pediatric infectious diseases physician in St. John’s, who took part in the press conference launching the children’s vaccination effort. “She’s been very, very steady in the past two years guiding us, and has engendered a lot of trust, so people take her advice seriously,” including regarding the need for pediatric vaccines.

RELATED: It’s time to switch to an N95 mask in the battle against Omicron

In Newfoundland and Labrador “there is a background culture of vaccine acceptance,” says Bridger. “We’ve got a bit of a history of being superstars when it comes to childhood vaccines,” thanks in part to a strong public health nursing system, which for decades has overseen those efforts. Newfoundland and Labrador is a notable provincial outlier for its COVID-19 vaccination rates: it’s the only province to reach more than 90 per cent when it comes to first doses, according to data from Health Canada (93.8 per cent to be precise, which is 12 percentage points above the national average); it also has the top spot for two doses: 86.2 per cent, compared to the Canadian average of 77.1 per cent.

Newfoundland and Labrador got off to a fast start with pediatric vaccines, immediately opening its booking system when the vaccines were approved for children, and having mass clinics operating within days. “We wanted to get as many shots in arms as possible before the Christmas break,” says Bridger. “We’ve got this vaccine–it’s approved–let’s not sit on it forever but get going as quickly as possible.” The province also offered doses to students on-site in schools. “Parents and caregivers really have lots of options for getting their kids vaccinated,” Bridger says.

And, in addition to press conferences and letters to parents regarding the province’s plans, the province held a photo-op similar to those that marked the very first COVID-19 vaccinations in December 2020, with Dr. Fitzgerald giving two girls their doses while Deputy Premier Siobhan Coady looked on.

Whether other provinces can adopt some of Newfoundland and Labrador’s successful strategies depends on how well they know their own populations, Bridger says. “I think it’s really important for the leadership to understand what motivates people to behave in a certain way.” For those in her province, a big motivator is seeing loved ones: “The inability to see grandparents and great-grandparents has been devastating for a lot of Newfoundland and Labrador children.”

The province also launched an advertising campaign that emphasized the message that vaccinating children helps prevent COVID-19 from spreading to friends and families while also tugging at heartstrings: “Because my nan needs help with her cookies,” was the tagline on one, featuring a girl behind a cookie sheet laden with dough, while another showed a boy and his grandfather playing a video game, with the caption, “Because my pop needs to play Minecraft.”

Bridger also points to the province’s culture. Its population is relatively small, and peer pressure, both online and within communities, is a strong factor in getting people to accept public health measures, including vaccinations, she believes.

And it’s also due to the reputation of Dr. Fitzgerald, who has been the public face for the vaccination effort. She is so beloved that her office is stuffed with gifts sent to her by the public—stuffed toys, needlepoint and children’s artwork. “She is as close to a saint as is possible in our province right now,” says Bridger. “And I’m not exaggerating.