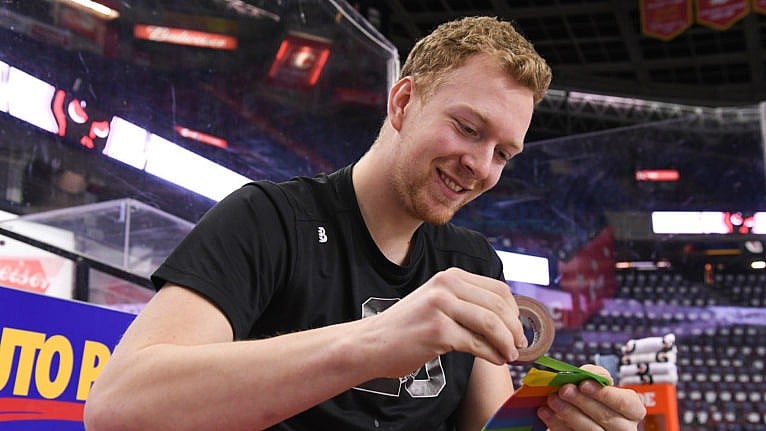 The 20-year-old defenceman from Edmonton hopes to play for the NHL in 2022, making him the first openly gay player to do so

On July 19, Prokop (seen here at the Saddledome) became the first active player under NHL contract to publicly come out as gay (Candice Ward/Calgary Hitmen)

It was a tough decision to come out. I didn’t know how it would be accepted by the hockey community. I had some long talks with family and friends, the people I’d come out to previously. At the end of the day, I wanted to do it. I’ve had to generate this not-really-give-a-s–t attitude. When I hear negative things about me, I don’t care as much anymore.

I still have to earn my spot on the team. My [junior] teammates are obviously proud of me for coming out and being my true self, but they’re happier that I’ve put in so much work as a hockey player to get to that point. I want to be known for getting to the NHL for my skills, not just because I’m gay. That may be one of the borders I have to push through.

I hope that all sports in general, not just hockey, become a safer place for young athletes. Our generation, I don’t think a lot of us care about sexuality and race and gender. We want what’s best for everyone. We want to see the best hockey players play. If you have the skills and the ability, you should be given the chance to play.

This story was told to Michael Fraiman by Luke Prokop, a 20-year-old defenceman from Edmonton and prospect of the Nashville Predators. He hopes to skate in an NHL game in 2022, becoming the first openly gay player to do so.

This article appears in print in the January 2022 issue of Maclean’s magazine with the headline, “Luke Prokop on striving to reach hockey’s pinnacle—on his own terms.” Subscribe to the monthly print magazine here.