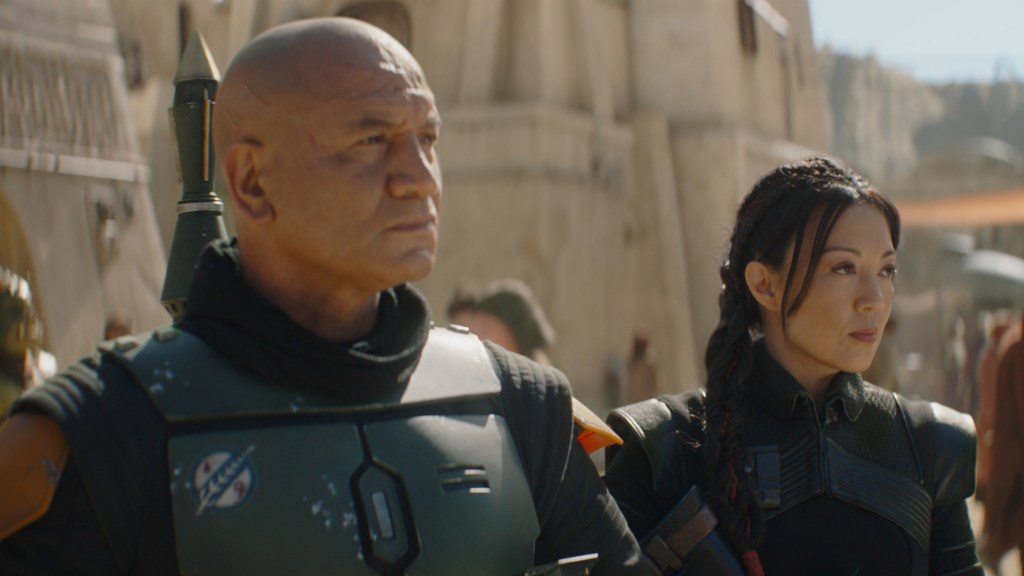 The Book of Boba Fett, the latest installment in the Star Wars franchise, has officially landed. Available Dec. 29 exclusively on Disney+,  the Mandalorian spinoff series stars Temuera Morrison as the bounty hunter Boba Fett and Ming-Na Wen as the mercenary Fennec Shand.

The first season contains seven episodes, which will be released every Wednesday at 12:01 a.m. PT starting Dec. 29.

Written by Jon Favreau and directed by Robert Rodriguez, the new show follows the character who was assumed dead after falling prey to the sarlacc in Return of the Jedi. He survives the tentacled ordeal on Tatooine (as seen in flashbacks in The Book of Boba Fett‘s first episode) and joins forces with Fennec Shand to take over Jabba the Hutt’s palace and his network of criminal cronies.

The legendary character even inspired a clothing collection from Columbia, and some pieces from the outerwear and accessories line are still available.

How to Watch The Book of Boba Fett Online

The Book of Boba Fett is a Disney+ original series, and the only way to watch is on — you guessed it — Disney+. A monthly subscription is $7 or you can save 15 percent with an annual plan, which is $80 per year. That gets you access to all of the Star Wars movies and spinoffs, including George Lucas’ original franchise and prequel trilogies, seasons one and two of The Mandalorian, Solo, The Force Awakens, The Last Jedi, The Rise of Skywalker and more.

And yes, there is a way to watch The Book of Boba Fett for free online. Although Disney+ no longer offers trial memberships, you can get six months for free when you sign up for Amazon Music Unlimited, which costs $10 monthly or $8 per month for Amazon Prime members.

If you really want to get the most for your money, consider getting the Disney+, ESPN+ and Hulu bundle, which is $14 per month for the ad-supported package or $20 monthly for the ad-free plan. Both options let you watch live sports and original series from Hulu and Disney+, including all of the Star Wars movies and series.

For those looking to truly cut the cord, you can get all of the above when you get the Hulu with Live TV plan, which starts at $76 per month and lets you stream over 75 cable channels live. You can also add on HBO Max, Showtime, Starz and other networks to expand your binge-watching options.