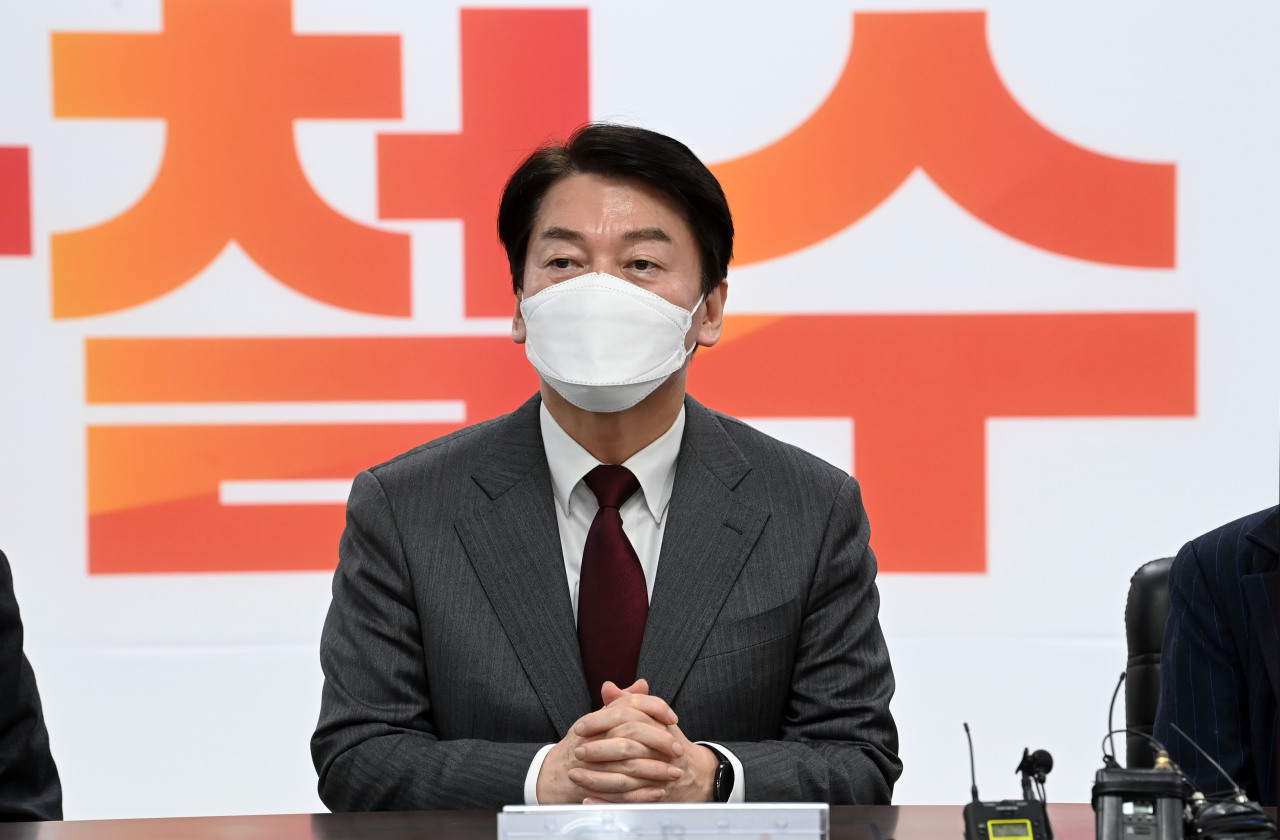 The trend is particularly visible for People’s Party chief Ahn Cheol-soo, whose ratings rose significantly while the mudslinging was in force between Lee Jae-myung of the ruling Democratic Party and Yoon Suk-yeol of the main opposition People Power Party.

The two main contenders have been battling controversies surrounding their family members, which cost them ratings in recent weeks, and voters increasingly searched for alternative options.

In the tight competition, Lee’s campaign team has also sought to join forces with nonparty figures to increase its chances of victory, with Democratic Party Chairman Rep. Song Young-gil calling on Ahn to unite his candidacy with Lee.

“The most meaningful candidate from the opposition bloc is Ahn,” Song said Sunday in an interview with Yonhap News Agency.

“He has a support rating of 5 percent, and it will be unfortunate to see him dissipate after declaring an agenda. It will be meaningful to him to join forces (with us) and grow ideas of his own.”

Ahn made it clear Wednesday that he will not seek to unite with any other candidates, calling the ruling bloc’s call a “vain dream.”

“I already said that I have no intention of uniting my candidacy with others whatsoever,” he told reporters at the National Assembly on Wednesday. “I said it countless times, so there’s no need to have any vain dream.”

Experts believe Ahn is unlikely to join Lee due to political differences. Instead, it has been widely speculated that Ahn could join forces with Yoon, if he ever considers a merger as an option, and experts say Song’s move was rather intended to prevent Ahn from joining hands with Yoon.

“We can reasonably assume that merger is unlikely to happen between Lee Jae-myung and Ahn Cheol-soo, but Song Young-gil’s action was undertaken to prevent Ahn from joining the other side.”

Rhee projects that Yoon’s ratings will suffer if Ahn commits to finish the race, as Ahn’s vocal disapproval of the Moon Jae-in administration is similar to that of Yoon, which will increasingly divide the voters and work in favor of Lee on the ruling bloc.

Finding a way to unite with Ahn is a critical task for Yoon, he added, but the job has become more difficult as Lee’s camp stole a march. Ahn has become more expensive to bring in, which will present a multitude of challenges for Yoon moving forward.

Yet experts say that the increasing disapproval on the two candidates are unlikely to affect the outcome of other two minor candidates, as they remain weak in appeal for the time being and people are still interested in Lee and Yoon as their final picks.

They believe Kim will likely drop out and join forces with Lee before polling day while Sim is expected to stay put for the sake of her party.

“Sim Sang-jung is likely to finish the race, because this could be the last opportunity for her to appeal to voters that the Justice Party is a politically progressive entity, not a mere satellite party of the Democratic Party,” political commentator Hwang Tae-soon told The Korea Herald.

“Her ratings are weak right now, but the core of the campaign really starts in February, so we will have to see if she will be able to make any difference.”

Hwang assessed that the Democratic Party could try to join forces with the Justice Party for the election on top of merging candidacy between Lee and Sim, but the scenario seems unlikely at this point as the process would difficult and too demanding.

“Lee Jae-myung would have to promise something big to bring Sim Sang-jung to his side, like a ministerial seat, while assuring some proportion of senior level positions and official posts for Justice Party members,” Hwang said.

“Whether that seems likely at this point, I don’t think so. But if the race continues to be extremely competitive like this, we can also consider this as a possibility.”