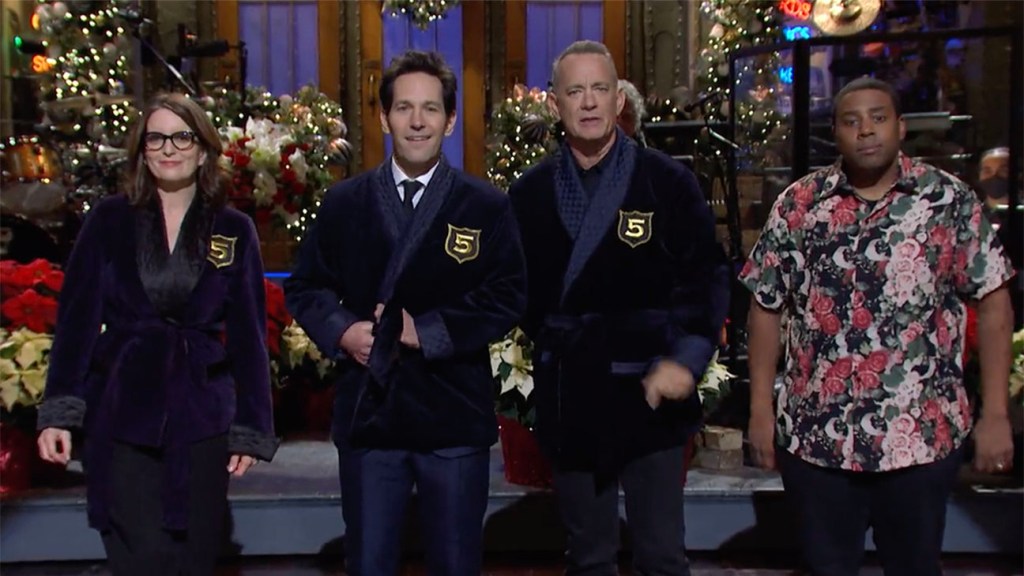 Hanks and Fey donned matching five-timer navy blue robes emblazoned with a gold “5” crest on the top left, and introduced Kenan Thompson to present Rudd with the honor, calling it his four and a half time, due to Saturday night’s episode being taped without a live audience and without musical guest Charli XCX.

Hours before the show, SNL announced the show would have a limited cast and crew “due to the recent spike in the omicron variant,” adding “the show continues to follow all government safety guidelines in addition to a rigorous testing protocol.”

“In the interest of safety, we do not have an audience and we sent home our cast most of our crew,” Hanks said. “As you know, I started the five timers club,” he continued, with Fey chiming in, “Oh, like he started COVID,” before introducing Rudd.

Rudd began by thanking everyone and joking, “I’m very disappointed,” to which Hanks replied it can’t be that bad because People Magazine named him “the most sexist man of the year.”

Unlike other weeks, the opening monologue featured guests besides the show’s host, with Steve Martin and Martin Short also making an appearance.

“I just want to congratulate Tom,” Martin said in a pre-recorded taping. “I’m a huge fan of Tom. One of my favorite movies is Forrest Gump,” while Short said in the background the message was for Rudd and joking he’s only hosted the show three times.

Back on the SNL stage, Fey, Hanks and Rudd explained that due to the short staff, the majority of the episode would consist of pre-taped sketches and some of their favorite skits over the years.

With Michael Che and Thompson being the only cast members in attendance Saturday night, Che hosted Weekend Update with Fey, instead, filming the segment in front of the regular stage for an audience of three: Thompson, Rudd and Hanks.

“[This is] a heartfelt Christmas song between a kid and a strange man at a department store,” Rudd introduced the song.

Rudd retook the stage, alongside Fey, Hanks, Che and Thompson, for the sign-off, thanking them and all the other cast, crew, writers and Charli XCX for all their hard work during a tough week. He also pointed out that it he understands it may not have been the Christmas episode fans were hoping for, but he loved hosting nonetheless.