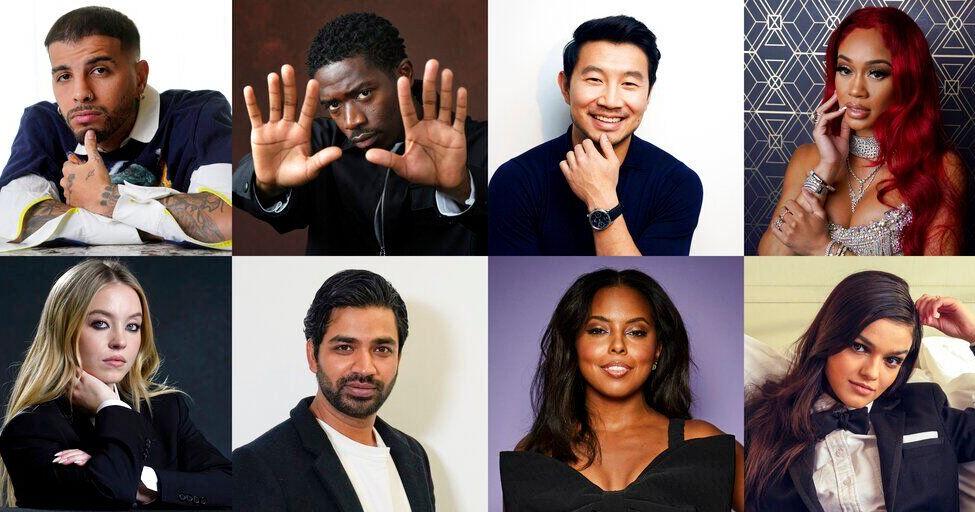 If 2020 was a pandemic-induced pause, 2021 was when things started up again, albeit slowly and timidly. But that doesn’t describe this year’s eight Associated Press’ Breakthrough Entertainers of the Year: They seized their masks — and the moment.

Click the links below to read the stories of this year’s Breakthrough Entertainers:

NEW YORK (AP) — When little-known actor Simu Liu tweeted in 2014 asking Marvel for an Asian American superhero, he wasn’t vying for a job — he was venting at Hollywood’s status quo.

In another timeline, Rachel Zegler would have had her breakthrough moment last December.

LOS ANGELES (AP) — He started off wanting to be a star soccer player, but instead Rauw Alejandro has become a breakout Latin music sensation.

NEW YORK (AP) — Adrienne Warren had studiously avoided ever touching a Tony Award her entire stage career. Her motto was that she’d only hold one if she deserved to.

LOS ANGELES (AP) — When Bay Area-rapper Saweetie learned she was nominated for two Grammys, including best new artist, the competitive nature she learned from growing up in an athletic household came out in full force.

LOS ANGELES (AP) — As she pursued her dream to become an actor, Sydney Sweeney’s family lost their home, her parents got divorced and she spent countless nights crying herself to sleep because of the constant rejection.

The year went quickly for Zegler, who had beat out thousands for the part of Maria in Steven Spielberg’s “West Side Story.” The pandemic pushed the film’s release a year but she didn’t stop.

Zegler was cast in and filmed the sequel to “Shazam” and snagged the role of Snow White in the live-action reimagining with Gal Gadot playing the evil queen. Then there was all the press for “West Side Story” and even a Met Gala invite. “I stepped out of my comfort zone,” she says.

Liu smashed through the Marvel Cinematic Universe’s comfort zone as its first Asian-led superhero stand-alone in “Shang-Chi and the Legend of the Ten Rings.” His was a career-making turn as Shang-Chi, who combines Spider-Man’s aw-shucks sweetness with lethal fists.

The path Tripathi took was far slower. For more than a decade, the Indian actor who relocated to South Korea more than a decade ago, spent countless hours singing in humble theaters and taking on minor film gigs. Then came “Squid Game” and sudden, massive popularity.

The pandemic stopped live theater in its tracks, so Adrienne Warren pivoted. While waiting for Broadway to restart, she turned to a project she never would have been able had she still been starring in the title role in “Tina — The Tina Turner Musical.”

Warren lost and gained 30 pounds to play civil rights catalyst Mamie Till-Mobley — whose son Emmett Till was brutally murdered in the Jim Crow South — in the upcoming ABC series “Women of the Movement.” She co-founded the Broadway Advocacy Coalition, which uses storytelling to dismantle the systems that perpetuate racism. And when Broadway resumed, she came back to earn her first Tony Award.

Idris’ popularity has grown exponentially over the past four seasons of the critically-acclaimed series “Snowfall.” His breakthrough role landed him other opportunities including “The Twilight Zone,” “Black Mirror,” “Farming” and Netflix’s “Outside the Wire.”

Sweeney sealed her stardom in 2021 with major roles in the hit HBO miniseries, “The White Lotus,” and Amazon’s sexy psychological thriller, “The Voyeurs.” She also filmed the hotly anticipated second season of “Euphoria,” which drops in January. On top of all that, Sweeney also started her own production company.

Bay Area-rapper Saweetie had landed three Top 40 hits in the last three years but in 2021 she earned two Grammy nods, made her debut on “SNL” and hosted the MTV Europe Music Awards in Hungary.

Like her, Alejandro has been on the rise for the past few years, but 2021 catapulted him into another level of success — five songs in the top 50, sold out shows and Grammy recognition. “This year has been my best, and I hope the next one surpasses this one,” he says, something his other nominees might agree with.

Photos: The world of entertainment saw rebirth in 2021

Get the recommendations on what’s streaming now, games you’ll love, TV news and more with our weekly Home Entertainment newsletter!