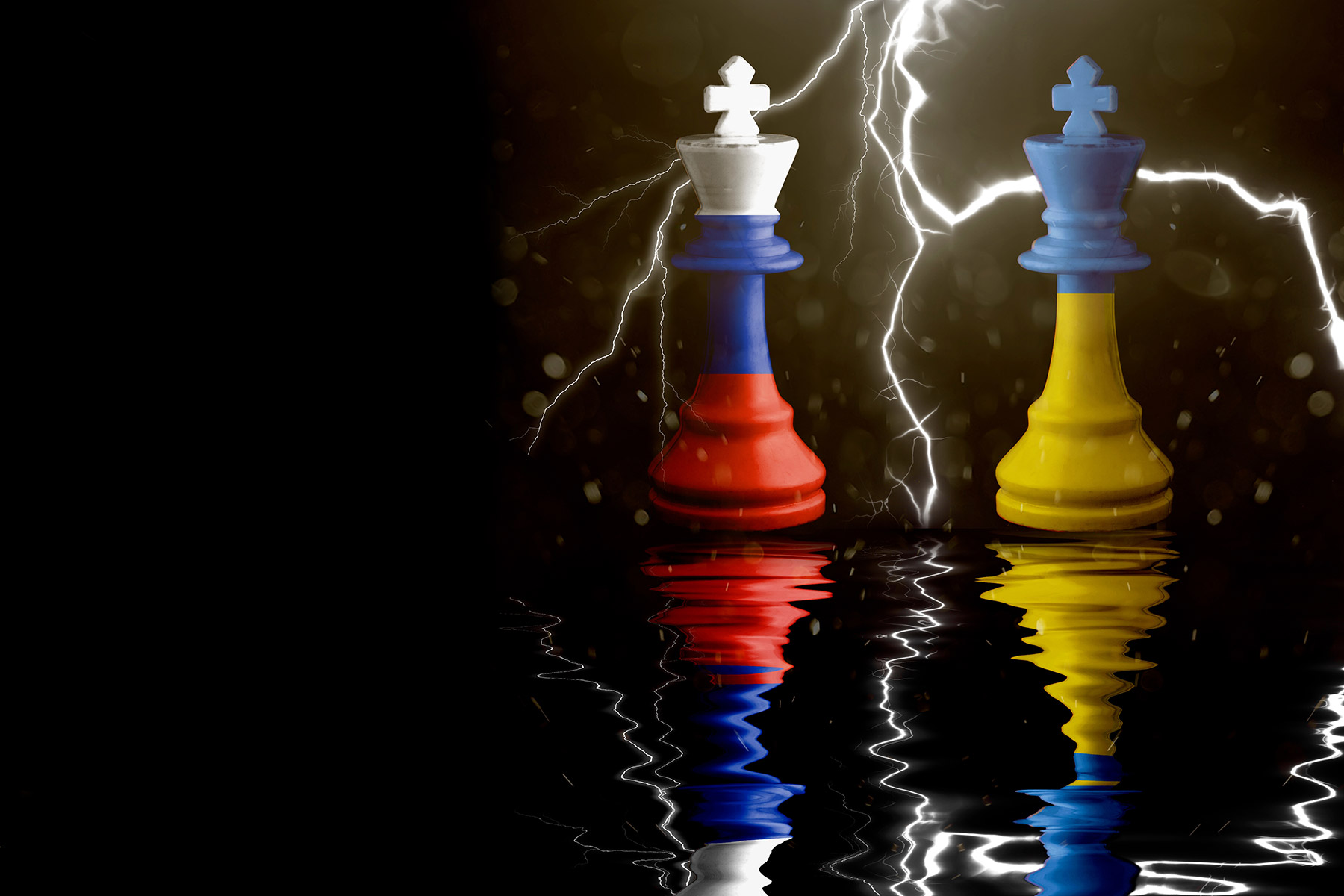 First, let’s be clear: Russia already invaded Ukraine. At the end of February 2014, Russian soldiers without insignia seized key facilities in Crimea and then helped secessionists in eastern Ukraine some weeks later. Crimea is now under Russian control and a civil war continues to flare up over the breakaway regions of Donetsk and Luhansk in the east.

Second, the United States has repeatedly provoked Russia by pushing the boundaries of NATO ever eastward. Virtually all of Eastern Europe is part of the military alliance, and so are parts of the former Soviet Union such as the Baltic states of Lithuania, Latvia and Estonia. Ukraine is in a halfway house called “NATO Enhanced Opportunities Partners” and it has contributed to NATO-led missions.

The Response to Russia’s Brinkmanship Over Ukraine

A majority of Ukrainians — those not living in Crimea, Donetsk and Luhansk — support NATO membership, according to a November 2021 poll. Such poll results are no surprise given that membership would provide Ukraine with the additional insurance of NATO’s collective defense clause. Of all the countries considering membership in NATO, Ukraine is the one that most threatens Russia’s national interests in what it calls the “near abroad.”

That’s some of the necessary context to the recent news that Russia has been massing around 100,000 soldiers along its border with Ukraine, coupled with medium-range surface-to-air missiles. Russia argues that such maneuvers are purely precautionary. Ukraine and its supporters think otherwise.

The United States has rallied its allies to warn Russian President Vladimir Putin not to invade Ukraine. It has promised to levy additional economic sanctions against Moscow as well as send more US troops to Eastern Europe to add to the several thousand American soldiers in Poland as well as those stationed at four US military bases in Bulgaria, a military facility on Romania’s Black Sea coast and elsewhere. The Biden administration has been clear, however, that it wouldn’t send US soldiers to Ukraine to confront Russian invaders.

Putin, meanwhile, has demanded that Ukraine’s membership in NATO be taken off the table. He has also called for an immediate security dialogue with the United States and has been strategizing with China’s Xi Jinping on how to coordinate their policies.

The transfer of troops to the Ukrainian border may simply be a test of the West’s resolve, an effort to strengthen Putin’s hand in negotiations with both Kyiv and Washington, a way of rallying domestic support at a time of political and economic challenges or all of the above. Given enormous pushback from the Ukrainian army among other negative consequences of a military intervention, a full-scale invasion of Ukraine is not likely in the cards. Putin prefers short wars, not potential quagmires, and working through proxies wherever possible.

A hot war with Russia is the last thing the Biden administration wants right now. Nor is an actual détente with Moscow on the horizon. But could Putin’s aggressive move raise the profile of US-Russia relations in such a way as to lay the foundation for a cold peace?

The civil war in Ukraine does not often make it into the headlines these days. Ceasefires have come and gone. Fighting along the Line of Contact that separates the Ukrainian army from secessionist forces breaks out sporadically. Since the beginning of the year, 55 Ukrainian soldiers have died and, through the end of September, so have 18 civilians, including four children. Many residents of the border towns have fled the fighting, but millions who remain require humanitarian assistance.

For the Russian government, this low-level conflict serves to emphasize its main message: that Ukraine is not really a sovereign country. Moscow claims that its seizure of Crimea was at the behest of citizens there who voted for annexation in a referendum. It argues that the breakaway provinces of Donetsk and Luhansk are simply exercising their right of self-determination in a political climate that discriminates against Russian speakers. Such fissures in the territory of Ukraine, according to this logic, suggest that the government in Kyiv doesn’t have complete control over its borders and has thus failed at one of the principal tests of a nation-state.

For Ukraine, the issue is complicated by the presence of a large number of Russian-language speakers, some of whom feel more affinity for Moscow than Kyiv. A 2019 law that established Ukrainian as the country’s primary language has not helped matters. Anyone who violates the law, for instance, by engaging customers in Russian in interactions in stores, can be subjected to a fine. So far, however, the government hasn’t imposed any penalties. That’s not exactly a surprise given that the current president, Volodymyr Zelensky, who objected to the law when he was running for office, is more comfortable speaking Russian in public.

Despite its domestic challenges and the recent history of Russian military incursions, Ukraine is very much a country. It is a member of the United Nations. Only a handful of states — Somalia, Palau — have neglected to extend it diplomatic recognition. There is no strategic ambiguity about Ukraine’s place in the international order as compared to, say, Taiwan.

Not even Putin, despite his paeans to “one Russia,” realistically contemplates trying to absorb a largely resistant country into a larger pan-Slavic federation with Russia and Belarus. After all, Moscow has had its challenges with the much smaller task of integrating little Crimea into the Russian Federation. Upgrading the peninsula’s infrastructure and connecting it to the Russian mainland has cost tens of billions of dollars even as the sanctions imposed by the West have cost Russian corporations more than $100 billion. A water crisis in Crimea — because Ukraine blocked the flow from the Dnieper River into the North Crimean Canal — has offset the infrastructure upgrades Moscow has sponsored, leading to speculation last year that Russian would invade its neighbor simply to restart the flow of water.

Invading Ukraine to resolve problems raised by the earlier invasion of Crimea would turn Vladimir Putin into the woman who swallowed a fly (and then swallowed a spider to catch the fly, then a bird to catch the spider and so on). Such a strategy promises larger and more diverse meals followed by the inevitable case of fatal indigestion.

So far, the Biden administration has offered a mix of threats and reassurances in the face of a possible Russian invasion. New sanctions and the dispatch of additional troops to Eastern Europe have been balanced by the refusal of the administration at this point to consider any direct involvement in Ukraine to counter Russian forces. Biden communicated this strategy not only in speeches, but in a two-hour telephone call with Putin last week. It was, by all accounts, a diplomatic conversation, with no bridge-burning and no Donald Trump-like fawning.

Biden and Putin may meet in early 2022. If that sounds like deja vu, you’re right. After Russia mobilized troops on Ukraine’s border last April, a Biden–Putin summit took place in mid-June in Geneva. Long ago, North Korea discovered that missile launches were an effective way of getting Washington’s attention. Russia can no longer count on Trump’s affection for authoritarian leaders to secure summits, so it has now adopted the North Korean approach.

The important thing is that Putin and Biden are talking and that the respective diplomatic establishments are engaging with one another. The problem is that both leaders face domestic pressure to take a more aggressive stance. In the United States, bipartisan efforts are afoot to send Ukraine more powerful armaments and escalate the threats against Moscow. In the Russian Duma, far-right nationalists like Vladimir Zhirinovsky and putatively left-wing leaders like Communist Party head Gennady Zyuganov have at one point or another called for the outright annexation of Ukraine’s Donbass region. Also, the approval ratings of both Putin and Biden have been dropping over the last year, which provides them with less maneuvering room at home.

To resolve once and for all the territorial issues involving Ukraine, the latter has to be sitting at the table. The civil war, although still claiming lives, is thankfully at a low ebb. But it’s important to push through the implementation of the 2014 Minsk accords, which committed Ukraine to offer special status to Donetsk and Luhansk that would provide them greater autonomy within Ukrainian borders. Ukraine can bring such a compromise to the table by pushing stalled constitutional amendments through the parliament.

Crimea is a different problem. Even if Ukraine has international law on its side, it cannot easily roll back Russian integration of the peninsula. As the Brookings Institution’s Steven Pifer points out, success might be the best form of revenge for Ukraine. If the country manages to get its economic act together — a difficult but not impossible task — it will present itself as a better option for Crimeans than being Moscow’s charity case. Queue a second referendum in which Crimea returns to Ukraine by popular demand.

The question of NATO membership should be treated with a measure of strategic ambiguity. The US government won’t categorically rule out Ukrainian membership, but it also can deliberately slow down the process to a virtual standstill. Russia has legitimate concerns about NATO troops massed on its border. Putin’s demand that the alliance not engage in a military build-up in countries bordering Russia is worthwhile even outside of its value as a bargaining chip.

Another major thorn in US-Russia relations is Washington’s opposition to the Nord Stream 2 gas pipeline to Germany. Obviously, it should be up to Germany where it gets its energy, and surely Russia is no worse than some of the places the US has imported oil from in the past (like Saudi Arabia). But the Nord Stream 2 pipeline is yesterday’s problem. The pipeline will soon become a huge stranded asset, a piece of infrastructure that will send unacceptable amounts of carbon into the atmosphere and will be made redundant by the falling price of renewable energy. The European Union, additionally, is considering a Carbon Border Adjustment Mechanism that will only add to the cost of imported natural gas, stranding that particular asset even earlier than expected.

Everyone talks about the United States and China working together to battle climate change. The same spirit of cooperation should animate US-Russia relations. The Russian government has been a little bit more forthcoming of late on setting decarbonization goals, but it has a long way to go, according to the analysis of these three Russian environmental activists.

Imagine Washington and Moscow working together to wean themselves off of their mutual dependency on fossil fuels. Let’s call it a “green détente” that includes regular “carbon control” summits designed to reduce mutual emissions, much as arms control confabs have aimed to cut back on nuclear armaments.

Of course, there are plenty of other issues that can and will come up in talks between the two superpowers: denuclearization, cyberwarfare, the Iran nuclear agreement, the future of Afghanistan, UN reform. Sure, everyone is talking about avoiding worst-case scenarios right now. The conflict over Ukraine and the conflict inside Ukraine are reminders that the United States and Russia, despite powerful countervailing pressures, can indeed go to war to the detriment of the whole world. Perhaps Putin and Biden, despite the authoritarian tendencies of the former and the status-quo fecklessness of the latter, can act like real leaders and work together to resolve mutual problems that go well beyond the current impasse in Ukraine.

*[This article was originally published by FPIF.]