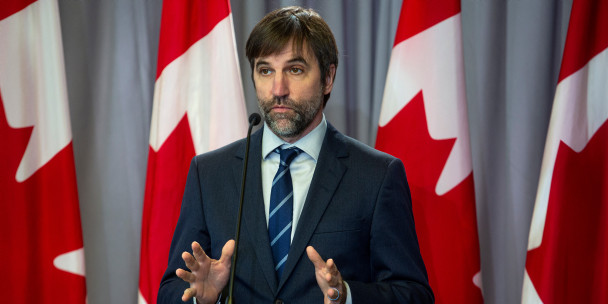 Environmental advocacy groups are pleased to see a “whole-of-government” approach to addressing climate change laid out in newly-released ministerial mandate letters that set the agenda for cabinet members and their departments.

Multiple ministers across multiple departments have now been publicly tasked by the Prime Minister’s Office to work together to address an increasingly urgent climate crisis here at home and around the world, and to put into place many of the promises made by the Liberals during the 2021 election campaign.

Prime Minister Justin Trudeau (Papineau, Que.) released new ministerial mandate letters on Dec. 16, more than six weeks following the announcement of his 38-member cabinet on Oct. 26 which saw a significant reshuffling of portfolios, including in environment, natural resources, and fisheries.

An environmental activist prior to his time in government, Environment Minister Steven Guilbeault (Laurier—Sainte-Marie, Que.) is now at the helm of a department that’s front-and-centre in dealing with the “existential threat” that is climate change, and tasked with finding opportunities to support Canada’s “whole-of-government effort to reduce emissions, create clean jobs and address the climate-related challenges communities are already facing,” according to his mandate letter.

Guilbeault’s letter names multiple ministers who are key to that across-government approach, including but not limited to Finance Minister Chrystia Freeland (University—Rosedale, Ont.) to ensure budgetary measures and climate-related financial disclosures are consistent with the government’s climate goals, as well as Public Safety Minister Marco Mendicino (Eglinton—Lawrence, Ont.) to help develop a climate data strategy that will help inform planning and infrastructure developments.

By March 2022, Guilbeault is expected to produce a plan for how the country will reach its legislated 2030 climate goals and table its first climate plan, something that the government is required to do as a function of the Net-Zero Emissions Accountability Act.

Natural Resources Minister Jonathan Wilkinson, then the environment minister, pictured speaking at the announcement of the government’s plan to reach net-zero emissions by 2050 at the Ornamental Gardens in Ottawa on Nov. 19, 2020. The Hill Times photograph by Andrew Meade

Caroline Brouillette, domestic policy manager with the Climate Action Network, said that will be a “key moment” to evaluate the implementation of different policies across government and provide a strong base to evaluate climate priorities in terms of transparency and accountability.

The two ministers will also co-operate to reduce emissions from the sector “at a pace and on a scale needed to align with the achievement of net-zero emissions by 2050,” with targets set every five years, according to Guilbeault’s letter.

Minister Wilkinson’s marching orders jumped out as the most significant among the letters to Julia Levin, senior program manager, climate, and energy at Environmental Defence. She told The Hill Times the text made clear the department “is moving to a new direction and actually aligning itself with the recognition that we’re in a global energy transition, rather than the old approach of sticking our heads in the sand and hoping the energy transition doesn’t touch Canada.”

The letter is “the most distinct” from previous versions of mandate letters to natural resource ministers, said Levin.

Guilbeault and Wilkinson have also been handed the same parliamentary secretary, Liberal MP Julie Dabrusin (Toronto-Danforth, Ont.), signalling the close ties between the offices, and each has a second MP supporting their considerable work: Terry Duguid (Winnipeg South, Manitoba) on environment and Yvonne Jones (Labrador, N.L.) on natural resources.

The two are mandated to achieve a net-zero clean electricity grid by 2035, as well as accelerating Canada’s G20 commitment to eliminate fossil fuel subsidies from 2025 to 2023, two years ahead of schedule. The two ministers will also work together to protect old growth forests, particularly in British Columbia.

Brouillette said she believes the prime minister has sent a clear message to all ministers that a whole-of-government approach to climate change is a priority—and that it’s important to ensure climate policy is “coherent and integrated across ministries and departments.”

According to Guilbeault’s mandate letter, in addition to new measures related to capping and cutting oil and gas sector emissions, this will include further reducing methane emissions across the economy, mandating the sale of zero-emissions vehicles and setting us on a path to achieve an electricity grid with net-zero emissions by 2035.

Guilbeault has “a huge list of priorities,” said Levin, but “giving the marching orders is the easy part.”

“Implementation is way more difficult,” she said. “It is important on lots of key issues that we’re seeing two, three, four ministers being assigned to any one really big policy, whether that be Just Transition, which has quite a few ministers involved, or whether that’s phasing out fossil fuel subsidies which went from two to now having three ministers involved.”

Just Transition is an approach to economic, environmental, and social policy that aims to create an equitable and prosperous future for workers and communities as the world builds a low-carbon economy, according to the government.

Levin noted that the mandate letters reflect the Liberal election platform, and there aren’t a lot of surprises or changes from the plan the government laid out a few months before.

But for the first time, there are very few parts of the country where people haven’t been impacted by climate change—whether it’s in British Columbia, where the infrastructure is still ravaged from record-breaking floods this year; in the North “where people’s homes are literally falling into the sea;” or in the Prairies where adverse weather related to climate change have impacted food prices and supply, said Levin.

Another point that caught Levin’s attention was the recognition that Canada must pursue all efforts to limit global warming to 1.5 degrees.

“That is an incredibly significant change, as we heard for example from the prime minister of Barbados during COP26 [last month], that warming beyond 1.5 degrees is a death sentence for millions of people across the world, and is also a death sentence for communities here,” said Levin.

At the Glasgow summit, Trudeau promised to impose a hard cap on oil and gas emissions, but Levin said Canada does not have time to wait on implementation.

“We don’t have three years to design the cap, the cap needs to be put in place as soon as possible, it needs to start driving emissions downwards,” she said.

Graham Saul, executive director of Nature Canada, told The Hill Times that his organization is focused on the twin existential crises of climate change and species collapse, and said he believes that this government has been “acknowledging and twinning those pieces more than any other government has.”

Saul said there’s been a “tectonic shift” in recent years in the federal government’s goals on nature conservation and addressing species collapse, including a major growth in available resources for key departments. The 2021 budget allocated $2.3-billion over five years, starting in 2021-22, to Environment and Climate Change Canada, Parks Canada, and the Department of Fisheries and Oceans.

The mandate letters reflect a willingness on the part of this government to push forward with a very ambitious set of goals, he said, but remain “open questions as to whether or not the government itself is able to respond and whether or not the Trudeau government will be willing to use the political capital necessary to force action on some of these areas,” said Saul.

Fisheries Minister Joyce Murray pictured arriving at West Block on Nov. 22, 2021 for the opening of the first sitting of the 44th Parliament. The Hill Times photograph by Andrew Meade

Guilbeault has also been tasked with establishing 10 new national parks and 10 new national marine conservation areas in the next five years, working with Indigenous communities on co-management agreements. He’s also received the call to establish at least one new national urban park in every province and territory, with a target of 15 by 2030.

Fisheries Minister Joyce Murray (Vancouver Quadra, B.C.), who was moved into the post following her time as digital government minister in the previous Parliament, has been tasked with Guilbeault to ensure Canada meets its goals of conserving 25 per cent of lands and waters by 2025, 30 per cent of each by 2030, according to her mandate letter.

As for the government’s pledge to plant two billion trees across the country over the next 10 years—a program under Wilkinson’s orders—Saul said it would require “a significant investment in growing new tree saplings” and that he’s not surprised the project has been slow off the mark given COVID-19.

“We are concerned that they focus on getting the right trees in the right places for the right reasons, and that once planted, those trees don’t just get chopped down 50 years from now,” said Saul. “We have not yet secured that clear commitment from the federal government, but we are working with them in good faith to try and make that happen.”