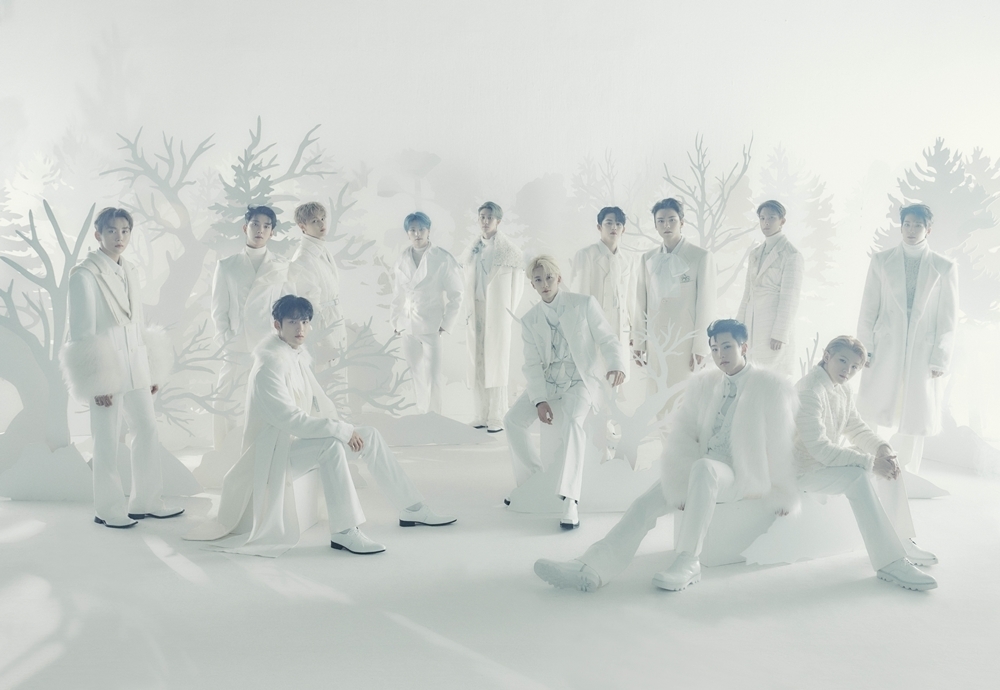 Seventeen continues to reign at the top of Japanese charts with its special single “Ainochikara.”

The single topped Billboard Japan’s weekly single sales chart, logging close to 247,000 copies in sales. It also was No. 2 on Billboard Japan’s Hot 100, according to the publication’s latest announcement on Wednesday.

It was released on Dec. 8 and landed atop Oricon’s daily single ranking and maintained the spot for six days before hitting its weekly single ranking at No. 1. The same-titled main track was No. 1 on a string of major music charts in Japan and on AWA, one of those charts, hogged the top three along with other tracks — Japanese version of “Home” and “Snap Shoot.”

Separately, the band was chosen as the artist of the month by MTV Push as “first-ever K-pop group to land an MTV Push feature.”

The music video of Twice’s “Alcohol-Free” surpassed 200 million views on YouTube as of Thursday, according to label JYP Entertainment.

All music videos for 15 consecutive songs the group promoted so far have reached the milestone.

The song is the lead track from its 10th EP “Taste of Love” that came out in June and written by head producer Park Jinyoung. The EP ranked No. 6 on Billboard 200 at the time, the best record for an EP released by a K-pop female band.

Twice is staying on Billboard 200 for four weeks in a row with its third studio album “Formula of Love: O+T=

Meanwhile, the nine-piece act will host a three-day concert in Seoul from Dec. 24. In February, it kicks off US tour that will bring it to five cities, from Los Angeles to New York.

TVXQ! will mark its 18th anniversary of debut with a livestream on its YouTube channel, said label SM Entertainment on Thursday.

The duo will host “Dinner with Cassiopeia – TVXQ! 18th Anniversary Party” on Dec. 26 and celebrate the occasion with a range of activities, from games to a mini recital.

It will be about ten months since U-Know is engaged in a public appearance. He has been keeping a low profile after violating a COVID-19 guideline for social distancing in February. He suspended all activities including an emcee gig for Mnet’s competition show among boy bands, which Changmin took over.

Earlier this month, they participated in an annual year-end song festival held by Japan’s Fuji TV, appearing in a Japanese music program for the first time in about two years. On the following week, Changmin released his solo EP “Human” there and next month, U-Know will drop his. The band’s album is due out in February.

The news came out with a poster that said “Coming Soon” and showed the characters under a spotlight seen from the back. Each of the members participated in designing the characters and fans were given a sneak peek at the band’s fan meet event “Cravity Collection: C-Deliver” last month.

The band will show how the characters were made with a series of video clips that will be uploaded twice a week on its YouTube channel from next week.