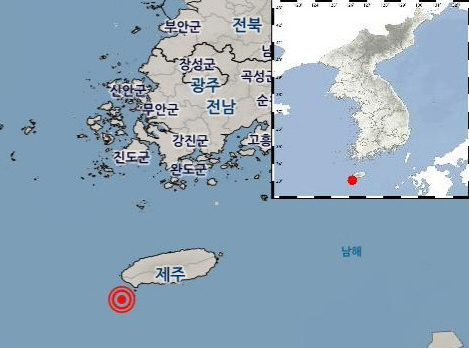 A powerful 4.9-magnitude earthquake on Tuesday afternoon struck the southwestern coast off Jeju Island, causing panic as it marked one of the strongest earthquakes in South Korea’s recent history.

The Korea Meteorological Administration said in an emergency alert that the earthquake was observed 32 kilometers southwest of Seogwipo, Jeju Island, at 5:19 p.m. Tuesday.

The epicenter is suspected to be 17 kilometers below sea level, with a latitude of 33.15N and a longitude of 126.24E, according to the national weather service. The earthquake was initially reported to have a magnitude of 5.3 but was later revised to be 4.9.

Authorities said Jeju Island residents could have experienced huge tremors due to the earthquake and they were in the process of verifying if any damage occurred. They advised people in the area to take cover and protect themselves from aftershocks.

Social media users believed to be in Jeju Island reported the ground shaking for three to four seconds, with some structures shaking. Local news reports said some fences were “violently shaken” and that people in the region were panicking from the unexpected shake.

The strongest earthquakes recorded in South Korea was a 5.8 magnitude shake observed in Gyeongju, North Gyeongsang Province, in 2016. The earthquake, despite being stronger than a 5.4 magnitude earthquake reported a year later, reported far less damage than expected.