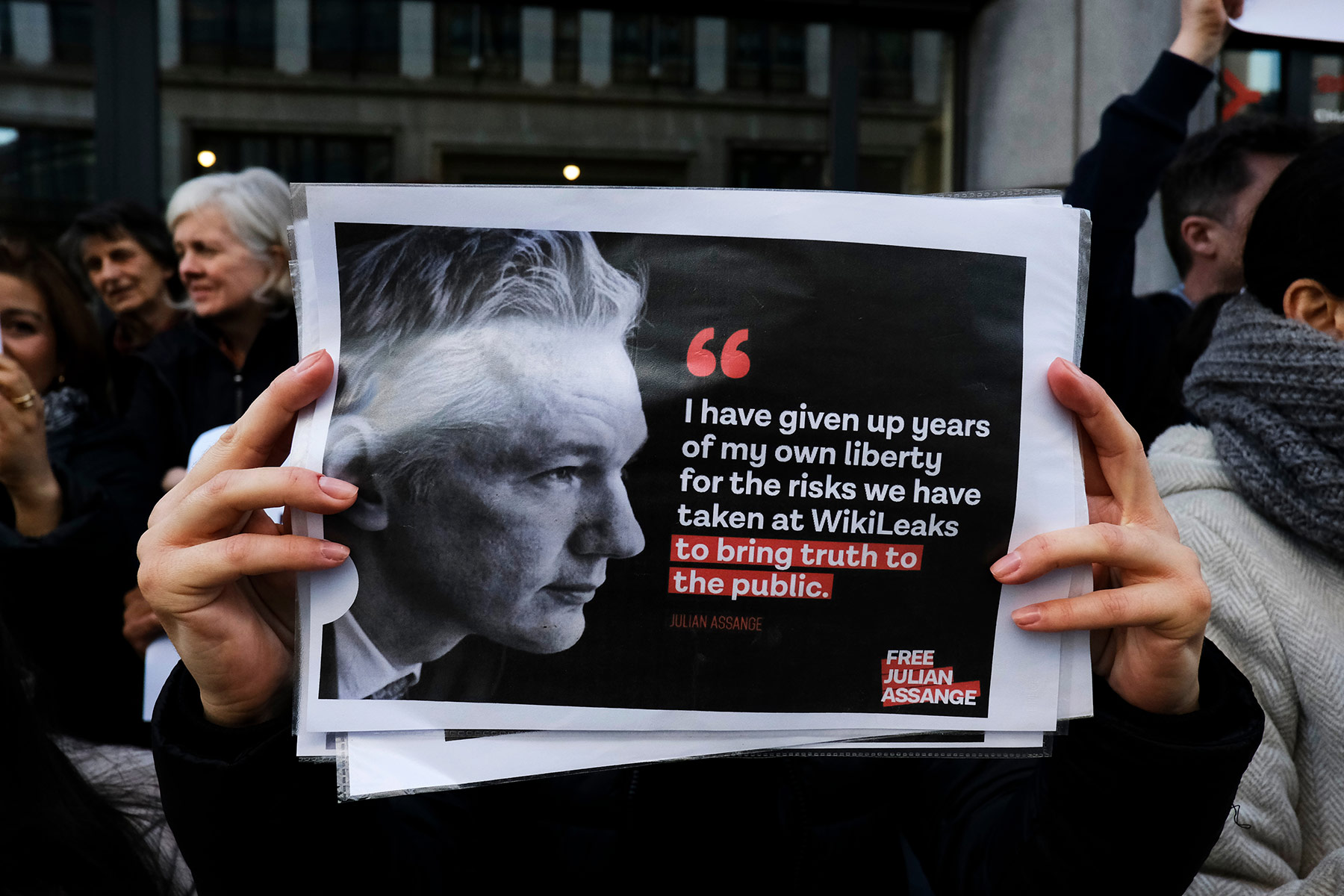 Last week witnessed the 80th anniversary of a moment in history qualified by Franklin D. Roosevelt as “a date which will live in infamy.” On December 8, 1941, the president announced that the United States was declaring war after Japan’s unprovoked attack on Pearl Harbor a day earlier. A nation that had spent two decades wallowing in isolationism instantly became one of the principal and most powerful actors in a new world war. Victory on two fronts, against Germany and Japan, would be achieved successively in 1944 and 1945.

Last week ended with its own day of infamy when a British court overturned an earlier judgment banning the extradition to the US of WikiLeaks founder Julian Assange. Following in the footsteps of the Trump administration, President Joe Biden’s Justice Department successfully appealed the ban in its relentless effort to judge Assange for violating the 1917 Espionage Act, itself a relic of the history of the First World War.

Guns and the Wrong Side of Rights

Back then, President Woodrow Wilson’s government pulled no jingoistic punches when promoting America’s participation in Europe’s war. It actively incited the population to indulge in xenophobia. Public paranoia targeting Germany, the nation’s enemy, reached such a pitch that Beethoven was banned from the concert stage, sauerkraut was officially renamed “liberty cabbage” and hamburger “liberty steak.”

The manifestly paranoid Espionage Act sought to punish anyone who “communicates, delivers, or transmits, or attempts to communicate, deliver or transmit to any foreign government … any document, writing, code book, signal book, sketch, photograph, etc.” The law, specifically for a state of war, was so extreme it was rarely used until Barack Obama unearthed it as the elegant solution for suppressing the whistleblowers he had vowed to defend in his first presidential campaign.

Despite overindulging his taste for punishing whistleblowers, Obama refrained from seeking to extradite Assange. He feared it might appear as an assault on freedom of the press and might even incriminate The New York Times, which had published the WikiLeaks documents in 2010. In the meantime, Democrats found a stronger reason to blame Assange. He had leaked the Democratic National Committee’s emails during the 2016 presidential primary campaign. Democrats blamed the Australian for electing Donald Trump.

During his 2016 campaign, Trump repeatedly praised WikiLeaks for its willingness to expose the undemocratic practices of the Clinton campaign. But once in power, Trump’s administration vindictively demanded Assange’s extradition from the UK for having revealed war crimes that deserved being hidden for eternity from the prying eyes of journalists and historians.

Many observers expected Biden to return to the prudent wisdom of Obama and break with Trump’s vindictive initiative. He could have quietly accepted the British judge’s decision pronounced in January. Instead, his Justice Department appealed. Unlike Trump, who sought to undermine everything Obama had achieved, Biden has surprisingly revealed a deep, largely passive respect for his predecessor’s most dangerous innovations — not challenging corporate tax cuts, the withdrawal from the Iran nuclear deal and Trump’s aggressive support for Israel’s most oppressive policies with regard to Palestinians.

Biden’s eagerness to follow Trump’s gambit aimed at subjecting Assange to the US brand of military-style justice allowed New York Times journalists Megan Specia and Charlie Savage to describe Friday’s decision by the British court as a success for the administration. “The ruling was a victory,” they wrote, “at least for now, for the Biden administration, which has pursued an effort to prosecute Mr. Assange begun under the Trump administration.”

Triumph in combat, including, at two extremes, cases marked by heroic action and others prompted by malicious self-serving motives and driven by the perpetrator’s confusion of the idea of justice with sadistic, vindictive pleasure

The Times journalists quote Wyn Hornbuckle, a Justice Department spokesman, who “said the government was ‘pleased by the ruling’ and would have no further comment.” At no point in the article do the authors evoke the hypothesis that Biden might have sought to overturn Trump’s policy. Nor do they analyze the reasons that could undermine the government’s case. They do quote several of Assange’s supporters, including one who called “on the Biden administration again to withdraw” the charge. Serious observers of the media might expect that a pillar of the press in a liberal democracy might be tempted to express its own concern with laws and policies that risk threatening its own freedom. Not The New York Times. This story didn’t even make its front page. None of its columnists deemed it deserving of comment.

Journalist Kalinga Seneviratne, writing for The Manila Times, offered a radical contrast. “If this year’s Nobel Peace Prize is about promoting ‘press freedom,’” he speculates, “the Norwegian Nobel Committee missed a golden opportunity to make a powerful statement at a time when such freedom is under threat in the very countries that have traditionally claimed a patent on it.” He quotes the UN’s special rapporteur on torture, Nils Melzer, who claims that “what has been done to Julian Assange is not to punish or coerce him, but to silence him and to do so in broad daylight, making visible to the entire world that those who expose the misconduct of the powerful no longer enjoy the protection of the law.”

Deutsche Welle’s Matthias von Hein noted the interesting coincidence that three converging events took place on the same day. “In a bitter twist of irony,” he writes, “a court in London has essentially paved the way for Assange’s prosecution on Human Rights Day — of all days. And how ironic that it happened on the day two journalists were honored with the Nobel Peace Prize in Oslo. Last, but not least, it coincided with the second day of the Summit on Democracy organized by US President Joe Biden.”

Von Hein added this observation: “We’re constantly hearing how Western democracies are in competition with autocratic systems. If Biden is serious about that, he should strive to be better than the world’s dictators.” But, as the saying goes, you can’t teach a 79-year old dog new tricks.

The coincidences do not end there. On the same day the news of Julian Assange’s fate emerged, Yahoo’s investigative reporter Michael Isikoff recounted the story of another man “brought to justice” by US authorities: Mohamedou Ould Slahi. The Mauritanian citizen had the privilege of spending 14 years in the Guantanamo Bay prison in Cuba without ever being charged with a crime, even after confessing to the crimes imagined by his torturers.

It turns out to be a touching moral tale. Even after years of imprisonment and gruesome torture, Slahi “holds no personal animus against his interrogators.” According to Isikoff, “he has even met and bonded with some of those interrogators,” years after the event. “I took it upon myself,” Slahi explained, “to be a nice person and took a vow of kindness no matter what. And you cannot have a vow of kindness without forgiving people.”

It wasn’t the Prophet Muhammad who said, “turn the other cheek” or “Forgive, and you will be forgiven.” Those words were spoken by the man George W. Bush and Donald Rumsfeld claimed to revere and whom Bush considered his “favorite philosopher.” The Quran did continue the original Christian insight, pronouncing that “retribution for an evil act is an evil one like it,” and that reconciliation and forgiveness will be rewarded by Allah.

There has clearly been no forgiveness in Washington for the “evil” committed by Assange: exposing war crimes conducted in secret with American taxpayers’ money. Slahi’s torture was conducted by the declared proponents of “Judeo-Christian” culture. Shahi’s forgiveness stands as an example of what that culture claims as a virtue but fails to embrace in its own actions.

Shahi is reconciled with his interrogators. But does he also feel reconciled with those who gave them their orders? In 2019, he said, “I accept that the United States should follow and put to trial all the people who are harming their citizens. I agree with that. But I disagree with them that if they suspect you, they kidnap you, they torture you, and let you rot in prison for 15 or 16 years. And then they dump you in your country and they say you cannot have your passport because you have already seen so many things that we don’t want you to travel around the world to talk about.”

Despite appearances,Mohamedou Ould Shahi’s case is not all that different from Julian Assange’s.