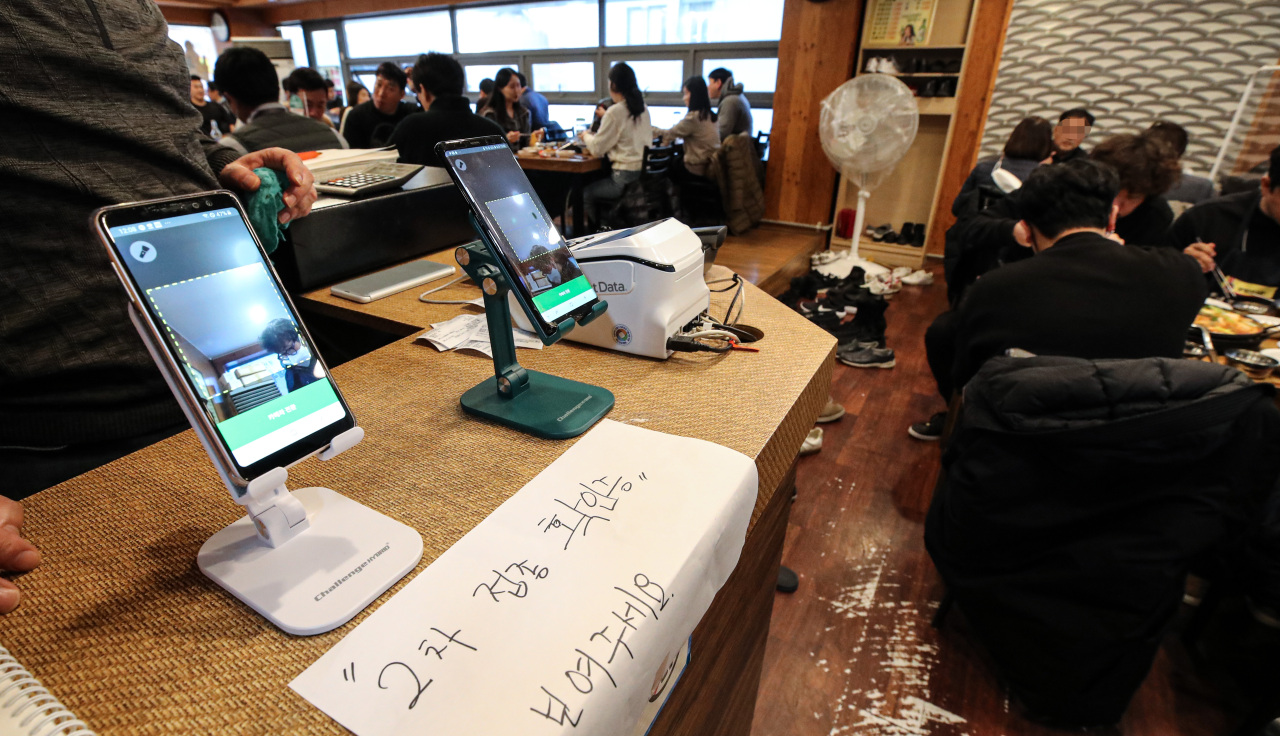 Cafe and restaurant owners and customers alike voiced complaints Monday as the government began enforcing the COVID-19 vaccine pass system in earnest in an effort to curb the spread of the virus.

Following a one-week trial period, the country officially began its vaccine pass system Monday, requiring all visitors to cafes and restaurants to present a certificate proving they have completed their COVID-19 vaccination or tested negative.

Businesses can be fined 1.5 million won (US$1,270) or suspended from operating for 10 days if they fail to abide by the vaccine pass system. Individual violators can face a fine of 100,000 won each time they violate the system.

The system, however, was not successfully carried out on its first day.

Many people experienced difficulties accessing either the government’s digital vaccine authentication system or authentications of QR codes through other popular services, such as Naver, Kakao Talk and Toss Bank, around lunch time.

Mindful of such technical glitches, health authorities said Monday’s vaccine pass scheme will be void and apologized over the inconveniences.

At some cafes and restaurants in the afternoon, employees only asked customers to register their entries through phone calls or visitors’ books without checking their vaccination status due to the heavy workload during lunchtime.

“Most of the customers (voluntarily) show their vaccination pass before coming in, but to thoroughly do the job, I need to employ another part-time employee, whose salary is not paid by the government,” an owner of a Korean barbeque restaurant in southern Seoul, surnamed Min, said.

In a popular online community of small business owners, some complained of the financial burden from expenses for getting the equipment needed for the system, such as mobile phones and tablet PCs, and possible fines they have to pay.

Some people, especially senior citizens, could not even have lunch, as they did not have a vaccine pass.

Around 11:30 a.m., two elderly people visited a rice soup restaurant in western Seoul but could not enter the establishment, as they did not have a vaccine certificate. One of them only had an old-generation mobile phone, which does not feature an online vaccine certificate system, and the other left his phone at home.

The government currently offers a vaccine QR certificate on its smartphone application COOV, which can be linked to other popular services, such as Naver and Kakao Talk, that are not available on feature phones. Those who cannot use COOV must bring paper vaccination certificates to enter cafes and restaurants.

As of Monday afternoon, over 356,000 people had signed a petition demanding the withdrawal of the vaccine pass system, calling the policy a “violation of basic human rights.”

“I have been trying not to catch COVID-19 by wearing face masks, but I guess I have to get vaccinated now as even my daily activities get restricted (under the system),” a citizen, surnamed Son, said. Son has yet to get inoculated due to an underlying skin disease. (Yonhap)