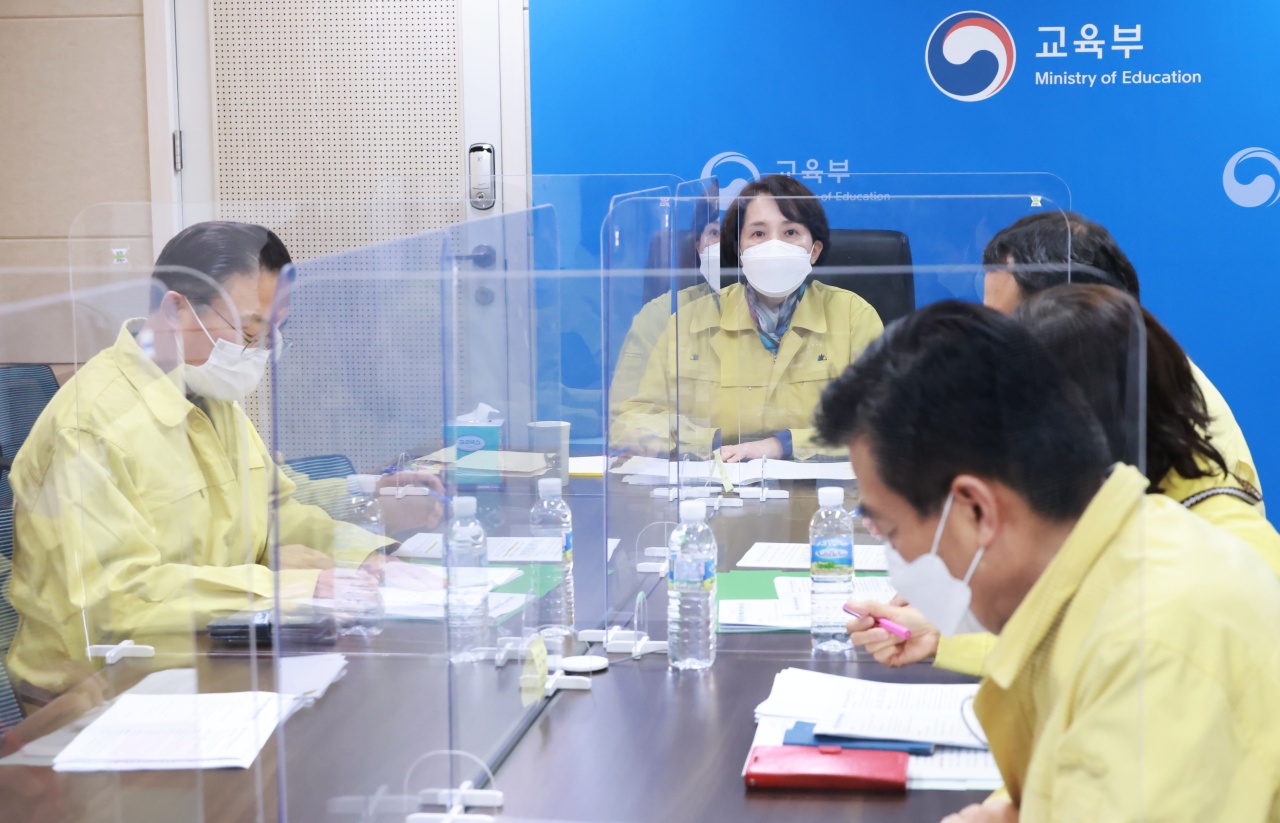 South Korea is set to begin a vaccination plan for youths from Wednesday, arranging for medical staff to visit schools to administer vaccines to those aged between 12 and 18.

Education Minister Yoo Eun-hae held a closed meeting Sunday with officials from the Education Ministry, Health Ministry and the Korea Disease Control and Prevention Agency, a day before the outreach inoculation programs at schools kicks off.

Though initially set to take place from Monday, authorities expect the outreach vaccination of teenagers at schools to begin from Wednesday, as related surveys wrapped up Sunday.

According to the survey, 80,433 students from 8,374 schools have signed up for vaccination at schools, as of Saturday midnight.

Though some continue to remain skeptical about South Korea’s vaccination plan for teenagers, authorities decided that a “vaccine pass” system for teenagers is necessary to prevent contamination among students and to protect those who have not been vaccinated.

It has pledged to keep working on improving the vaccine pass system, the ministry said, after consulting experts.

Some have voiced criticism against the government for deciding to expand the vaccine pass system to youths from February.

High school student Yang Dae-rim, who runs his own YouTube channel, said Friday at a press conference that he would file a constitutional appeal along with 452 other people against the government for pushing for the COVID-19 vaccine pass system, claiming the system violates their basic human rights.

“The government is forcing people to be vaccinated in a situation where the safety and effectiveness of the vaccine are being questioned,” said lawyer Chae Myung-sung, who represents the group.

Some civic groups have continued to hold protests.

In regards to concerns against vaccinating youths, Prime Minister Kim Boo-kyum wrote on his social media account Saturday, “The authorities know that there is an easier way to deal with all this. But without knowing the data, which shows definite truth, we simply could not.”

”No one, including me, can guarantee that there wouldn’t be any side effects for teenagers 100 percent. But I can say with confirmation that the level of vaccine side effects in teenagers are low and it is much safer for them to be vaccinated,“ he wrote.

According to the authorities, 36.5 percent of those aged between 12 and 17 have been fully vaccinated as of Sunday. Some 51.8 percent of those in the age group have received a first dose of a COVID-19 vaccine.