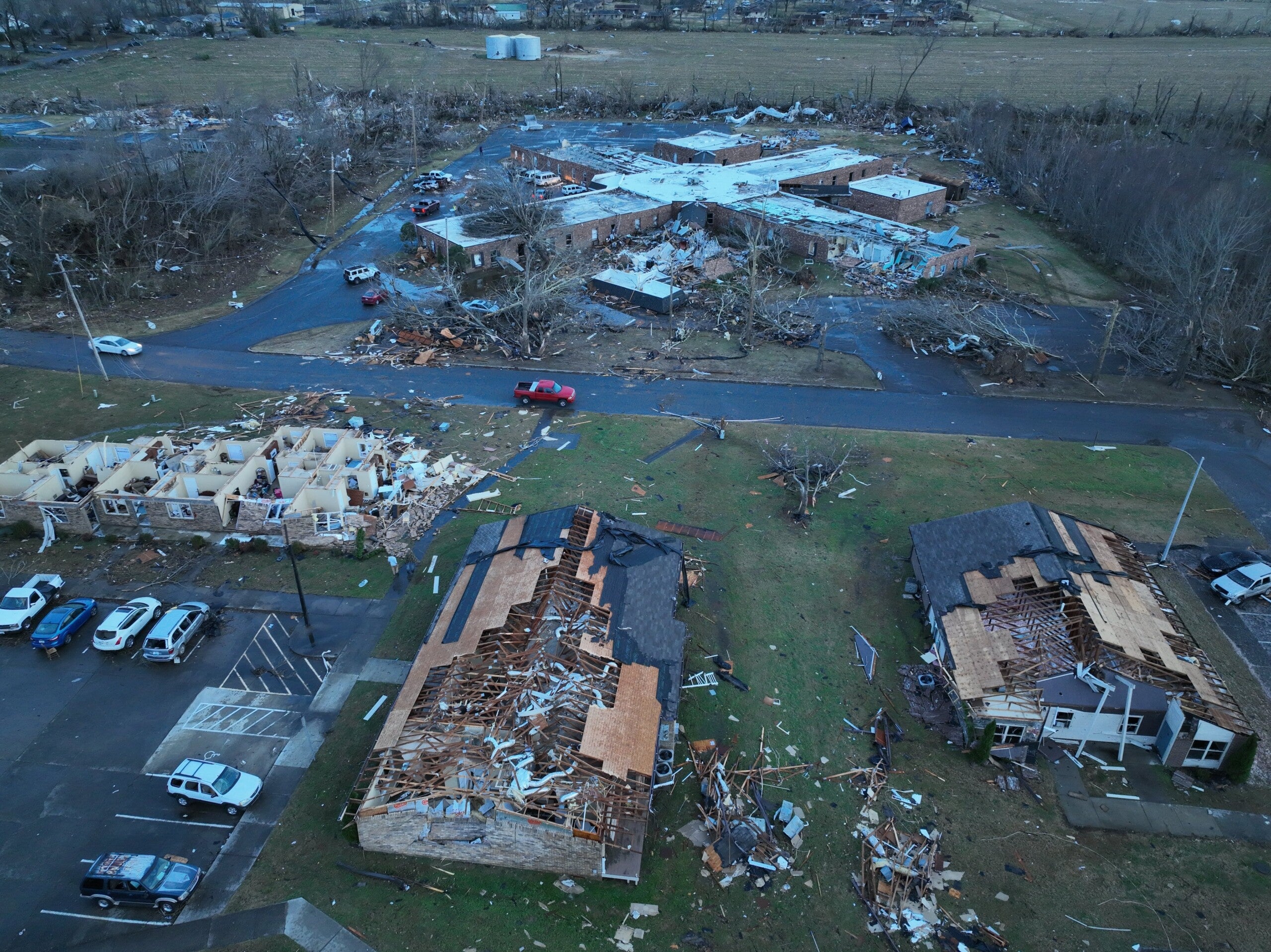 (CNN) — Kyanna Parsons-Perez was in a storm shelter with other employees at a candle factory in Mayfield, Kentucky, on Friday night when she felt wind, even though she was deep inside the building.

Someone was taking attendance, “and then the next thing you know, there was like a little gust of wind,” Parsons-Perez said.

Then her ears started popping, and it felt like the building was rocking. “Then boom, everything fell on us,” Parsons-Perez said Saturday morning.

Gov. Andy Beshear said the storm, which killed at least 70 people in the state, was the “most severe tornado event in Kentucky’s history.” Mayfield appears to have born the brunt of it.

There were few buildings left standing in the town of about 10,000, and it completely leveled the Mayfield Consumer Products candle factory, where more than 100 people were working overtime as production stepped up because of the upcoming holidays.

Parsons-Perez said something hit her head, and when the chaos stopped, she said her legs were pinned underneath a water fountain.

She began to hear moans and prayers from her coworkers, she said, and she tried to keep them calm by cracking jokes, and calling 9-1-1.

But as the minutes stretched on and on, and as she lost feeling in her toes, she too became concerned, she said. At some point, she began broadcasting on Facebook Live.

“I don’t know who’s watching,” she said, and her panicked coworkers could be heard in the background. “Y’all please send us some help. We are trapped. The wall is stuck on me. Nobody can get to us. Y’all. Pray for us. Try and get somebody to help us.”

By what seems like a miracle, Parson-Perez was rescued from underneath 5 feet of rubble and had to climb that pile to get out.

‘I’m looking for you, baby’

Others, it seems, were not so lucky.

When the storm passed, people were at the site of what had been the factory, now just a pile of debris and rubble, looking for relatives and friends they knew had been working there Friday night. As of midday Saturday, more than 100 people were still missing.

Williams said he last heard from his wife Friday night before the tornado hit. His daughter told him that the factory was damaged, but when he arrived on scene, he wasn’t prepared to see the building completely leveled.

Williams was able to pull two people out, he said, but hadn’t found his wife.

Emergency response crews from around the state were helping search Saturday.

“I’m standing outside of what used to be the factory now, and it’s a level of devastation that none of us have ever seen before,” Beshear said.

“We have dozens of people that are out here searching, hoping. We haven’t, unfortunately, had a successful rescue since about 3 a.m.,” Beshear said Saturday morning. “There’s just a huge amount of loss here and across the Commonwealth.”

At least four tornadoes hit western Kentucky, tearing a wide path of destruction, the leader of Kentucky Emergency Management Services said. In all, more than 30 tornadoes were reported in six states in the deadliest December tornado outbreak on record. At least 79 people were killed.

“The track for this tornado event is over 200 miles just in Kentucky,” said Michael Dossett. The damage “may surpass the 1974 Super Outbreak,” a devastating tornado system that flattened hundreds of homes in Louisville as it tore across more than a dozen states.

Beshear declared a state of emergency Friday, and every resource is being deployed, he said. The National Guard is being positioned to search for survivors in multiple counties

Beshear said he also requested an emergency declaration from the White House, which is also sending resources.

Factory was one of the town’s largest employers

Saturday morning, Parsons-Perez said she was going to a hospital to get checked out because her head hurt and she was sore.

“Once I got out of there, I couldn’t do anything but thank God,” she said. “That’s the only thing that saved me. It’s unbelievable that anybody walked away from there.”

Mayfield Mayor Kathy Stewart O’Nan, who was with Beshear surveying the damage, said her heart was broken upon seeing the destruction.

The factory, started by a local woman, was one of the largest employers in Mayfield, and many of the employees were inside at the time the storm hit, working extra hours because of the holiday season.

O’Nan said she is hopeful that the community will come together.

“We’re a small community. We are a strong community. I know that in the months to come, we will see the best of the people in this town,” O’Nan said. “This is what we do. We take care of each other in bad times.”