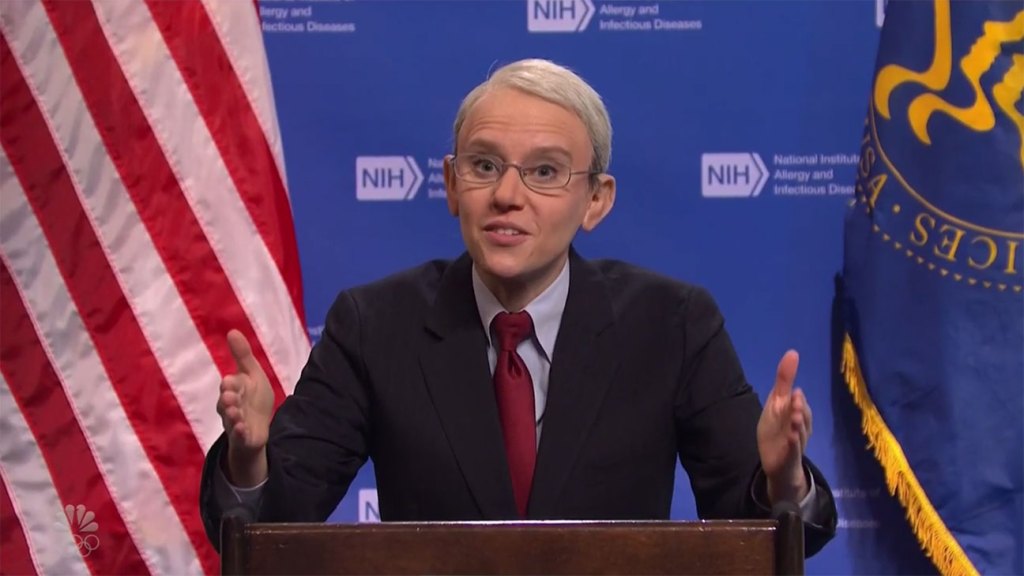 McKinnon, as Fauci, opened the segment by asking, “Do people still think I’m sexy? People see me on TV, and they think, ‘Oh, this can’t be good. That Elf on the Shelf got old.’”

She continued, “Most recent data suggests that if you had a vaccine and a booster, you should be pretty well protected. So, if that’s you, I’d like to officially say: Unclench.’”

McKinnon’s Fauci then went on to introduce members of the CDC, played by SNL cast members, who would address questions people may have now with the omicron variant: “Is it safe to travel?” “Can I still use this as an excuse to get out of of stuff?”

McKinnon went on to say those wouldn’t be the only public figures who tend to act deeply offended about minor things. “Some of our most gifted performances these days come not from Hollywood but from Congress,” she said, introducing Cecily Strong’s Marjorie Taylor Greene and Chloe Fineman’s Lauren Boebert.

“The government has been using this fake disease to strip us of our freedom. Do they think we’re dumb?” Strong asked. “Please. Would they give a dumb person a gun?” Fineman added.

Toward the end of the cold open, Bryant’s Cruz returned, introducing herself as “the weirdo with the beardo, Ted Cruz,” adding, “If you’re sick of seeing me, imagine how sick I am of being me.”

McKinnon’s Fauci ended the segment by saying, “I think we can all agree on at least a few things: We all want to spend time together with our families.” Bryant chimed in, “Or run it back solo to Cancun.”

“Family is all we have,” Davidson’s Andrew added, with Dismukes’ Chris saying, “as of two weeks ago.”

Strong’s Greene had the last word: “And, we can all agree that the Fox News Christmas tree arsonist must be executed.”