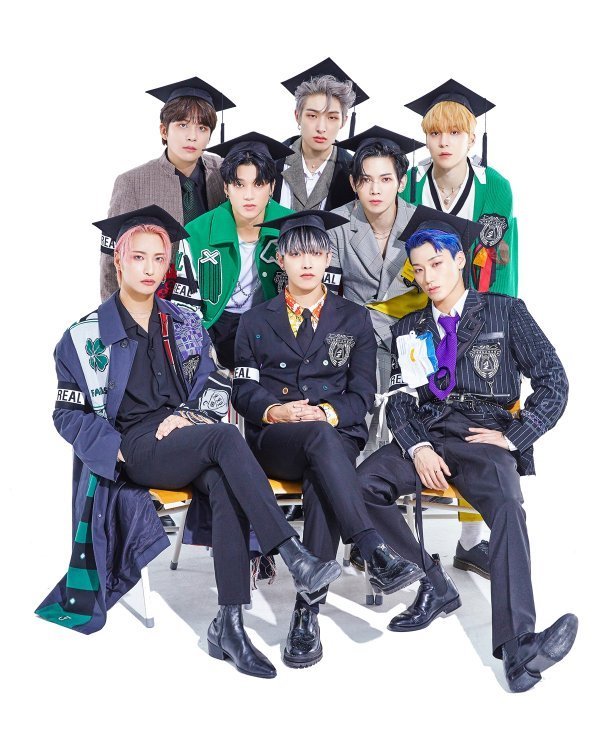 Ateez came out with a repackaged EP on Friday, just in time for the holiday season.

“It felt as if we were preparing a surprise gift, making music that fans would like to listen to and putting together performances they’ve been waiting for,” said Hongjoong in a statement released by the group’s agency KQ Entertainment.

Seonghwa was filled with emotion that the 10-track EP wraps up the “Fever” series and added that he felt that the band was maturing along with its music. “To put it briefly, we are graduating from the series with this album and expressed the mood with a graduation theme, as was hinted through the teaser contents,” noted Jongho.

The EP has two focus tracks — “Turbulence” and “The Real.” Through “Turbulence,” they want to offer empathy and consolation for young people who are seeking their own answers from life, according to Mingi. “The Real,” on the other hand, fully demonstrates how awesome they are, merging traditional Korean musical instruments with hip-hop beats.

But most importantly, “We hope that we can influence many in a good way through our music and performances,” said Wooyoung.

Wanna One suspends rehearsals for 2021 MAMA

One of Wanna One’s staffers who was present at a pre-recording of the 2021 Mnet Asian Music Awards tested positive for COVID-19 and the rehearsal was called off on Friday, according to local media reports.

All members of the band, along with the staff, were tested out of precaution right away and fans who were waiting to participate in the filming were turned away.

Fans were eagerly awaiting to see Wanna One reunite for the first time in almost three years after it officially disbanded after 1 1/2 years as a project group.

All members of the 11-piece act, except for Lai Kuan-lin who is in China, were preparing for the award ceremony where they were to perform a new version of “Beautiful.” The song is the lead track from its 2017 full-length album “1-1=0.”

Rookie girl group Ive set a record with its debut album, according to statistics released on Friday.

The band’s debut single “Eleven” sold 152,229 copies in the first week after it came out on Dec. 1, the most for a girl group’s first album in Korea. It also is the most sold album released by a group that has debuted in 2021.

The single not only ranked in the top 10 on all major music charts in Korea but also entered Spotify’s global top 200. The title track of the same name hit Billboard’s world digital song sales chart at No. 12 and landed atop its hot trending songs chart. It also was No. 22 on the worldwide iTunes songs chart.

The six-member act also picked up a trophy at a television music chart show Wednesday where it performed for the first time.

Boy band Victon will return next month with a new album, the group’s agency IST Entertainment announced on Friday.

The news follows the teaser video for its upcoming fan meet event, “2021 Victon Fan Meeting ‘Sweet Travel,’” which was originally slated for last week but was canceled after Heo Chan contracted COVID-19 late last month. Rescheduled dates for the in-person event are yet to be announced and the band uploaded a video that chronicles its five-year career for fans.

The band’s last release was its first studio album “Voice: The Future Is Now” in January. The LP earned the seven-member band its first trophy from a television music show since its 2016 debut. It also was among the top three on iTunes top albums chart in seven regions.

Meanwhile, it recently released a season’s greeting package for next year. Named “After the Happy Victon Day,” the bandmates enjoy themselves in pajamas after hosting a party in their music video for “Sweet Travel” in a series of merchandise that ranges from a calendar and diary to sets of stickers.