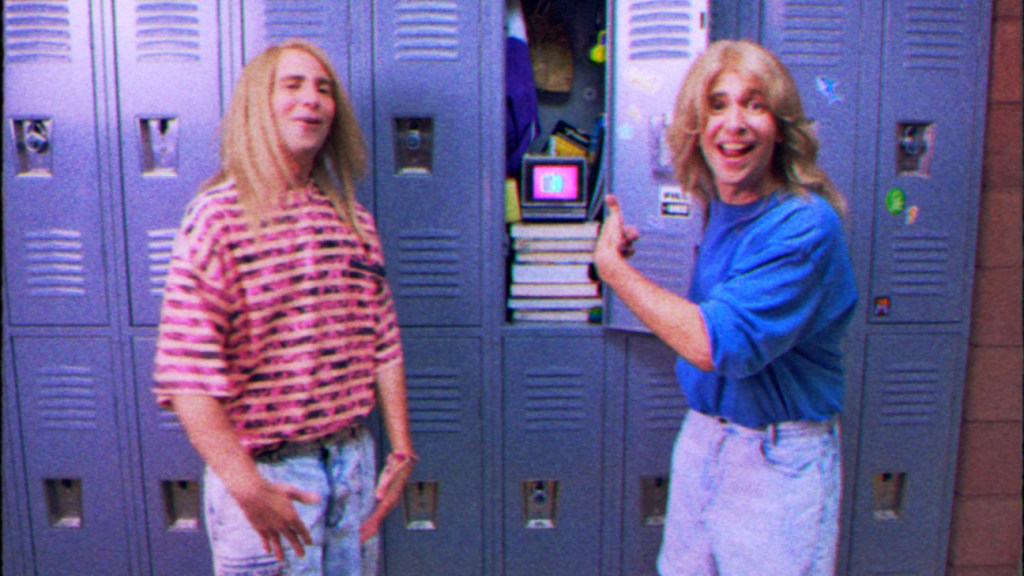 Pity the kids of today with on-demand television options placing their every programming delight at their fingertips any time of day or night on any television or computer or table or phone or watch that they have access to!

They’ll never experience the joy of slipping downstairs before dawn on a Saturday morning, eating bowl after bowl of sugared cereal and watching a lineup of cartoons, sitting inches away from the only TV in the house to keep the volume low so that their parents don’t wake up.

Amusingly committed to the bit.


Sure, modern tykes have the freedom to watch whatever they want when they want it and where they want it, but they won’t ever understand the metaphorical freedom that the Saturday morning cartoon ritual represented.

Kyle Mooney and Ben Jones understand, though they’ve made their new series Saturday Morning All Star Hits! for Netflix, a service at least partially responsible for destroying the regimented, highly scheduled, utterly entrenched way of watching TV being nostalgized here. It’s a bit like if José Andréas announced that what he really wanted to do was run a McDonalds franchise, which is to say it’s moderately ironic. At the same time, if José Andréas said he was doing it because he grew up loving McDonalds, you’d at least be curious what his angle was.

With Mooney, you can pretty well guess his angle. He’s been on Saturday Night Live since 2013 and his drolly oddball sensibility has become a staple of the show’s post-“Weekend Update” real estate, home to sketches and filmed bits deemed too much of an acquired taste for the opening hour. The mixture of absurdism and underlying earnestness running through Saturday Morning All Star Hits! will be familiar to fans of SNL. It’s elongated, which will either sound like a blessing — Brigsby Bear, which Mooney co-wrote and starred in, offered a previous glimpse at his sensibility in longform — or a curse. I have a lot of the same nostalgic yearnings as the show and found frequent things to be amused by, without ever feeling like the thing that Saturday Morning All Star Hits! built to was quite worth the journey.

Mooney stars as Skip and Treybor, twin brothers and hosts of the eponymous ’80s TV show that serves as a high-energy framing device for a slew of animated programs, all representing different narrative types that will be familiar to Gen-X or millennial audiences. Mooney also plays Johnny Rash, an ’80s movie star seeking pop music stardom, as well as Johnny’s brother Ethan, an aspiring writer. Oh and Mooney plays Bruce Chandling — yes, SNL viewers, that Bruce Chandling — a questionably talented standup comic whose childhood years are being adapted into a cartoon set to air as part of the Saturday Morning All Star Hits! block.

The series is presented as a run of slightly edited VHS recordings of Skip and Treybor’s show, chronicling the sibling rivalry that builds up when Skip’s one-line cameo in the toy-based toon Strongimals launches one brother into stardom and leaves the other simmering in resentment. This plays out in little passive-aggressive vignettes sprinkled around full-length episodes of the individual cartoons from the block.

That means we get 10-ish-minute installments of shows like the aforementioned Strongimals, about a group of anthropomorphized alien animal warriors who travel the galaxy harnessing the power of peace, before they end up stuck on Earth, or Randy!, about a dinosaur who lives in a museum and befriends a group of teenagers before deciding to go to music college. There are snippets from period-appropriate commercials and one full episode in the form of a primetime news magazine. Woven in newsbreaks throughout the tapes is a secondary plot about the mysterious disappearance of the stars of a Blossom-style sitcom hit.

The thing that Mooney and Jones, with Bigsby Bear helmer and SNL veteran Dave McCary directing the live-action segments, are doing actually relies on duration in a way that a sketch could never achieve.

Saturday Morning All Star Hits! is at its least funny when it’s relying on recognizable jokes and at its best when it pays sustained and stone-faced homage to an entire viewership experience. The animation, courtesy of Bento Box, captures the primitive, hastily produced charms of the shows from that period, but the stories have a serialized melancholy that you never would have found on The Care Bears or ThunderCats or Bobby’s World, which are clear inspirations here. The aforementioned Randy! starts with “What would it be like to have a skateboarding dinosaur as your pal?” but plays out as “What would it be like to be a skateboarding dinosaur experiencing waves of isolation and sadness in a world that can never quite embrace you?” The somber undercurrent of the cartoons echos the fracturing of Skip and Treybor’s fraternal relationship, all playing out in weekly installments.

There are, in this formula, shades of MacGruber, and Mooney’s Saturday Night Live progression in some ways mirrors Will Forte’s creative growth. I would expect Saturday Morning All Star Hits! to have a similar gap of responses to that of MacGruber, which arrives on Peacock in TV series form next week as a series you probably already know that you either love or do not get at all.

Saturday Morning All Star Hits! never establishes a MacGruber-style escalation, though, and while I liked the slow-burn that Mooney and Jones are going for here, you have to accept that what’s funny is the build-up and not the destination for any of the various storylines. It’s a small chronicle of a sibling rivalry wedged into a format of inherent silliness, but Mooney’s sense of honor is never to push into full-on surrealism, or at least ridiculousness, the way a Forte or Fred Armisen prefer to. His characters aren’t destined to be action heroes or superstars, but just nerdy dreamers who tend to fizzle out before meeting their aspirations, more likely to wring a wry smile of recognition at a communal reference than big laughs.

That frequent smile is mostly what I took away from Saturday Morning All Star Hits! whether generated by Mooney’s goofy enthusiasm, occasional big-name guest voices for the animation — like the Oscar-winning wife of one of the key creatives — or the general commitment to the bit, the playing out of a deadpan sensibility in a genre typified by childlike glee. I wanted something more cumulative from these eight episodes, but maybe I just needed to watch one episode per week, at 7 a.m. on a Saturday accompanied by some Lucky Charms.