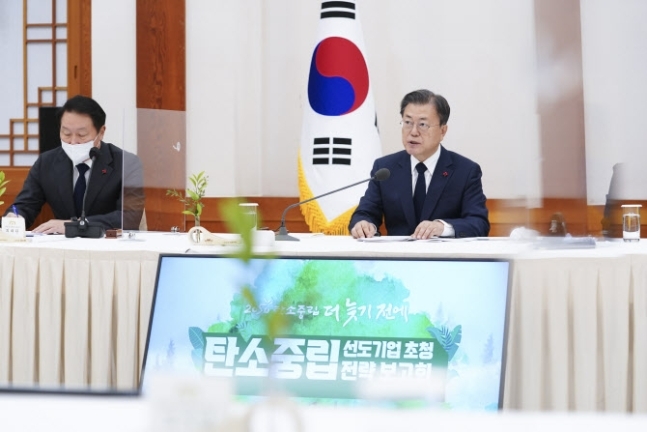 South Korean President Moon Jae-in on Friday lauded the efforts made by companies to cut carbon emissions, and reiterated that the goal to achieve carbon neutrality by 2050 is “must” for the country.

In celebration of the first anniversary of the declaration of the country’s 2050 carbon neutral vision, Moon invited company leaders and economic organizations to check on the year’s progress and renew their determination, according to the presidential office.

“Carbon neutrality is the direction South Korea must pursue for the future generation,” Moon said.

“The global industry is changing fast with the carbon neutral movement, so we should not allow ourselves to get trapped below the glass ceiling of a high carbon barrier, and take a leap toward the higher future of low carbon market.”

At the event, the chiefs of five economic organizations, including Korea Chamber of Commerce and Industry Chairman Chey Tae-won and some 20 corporate officials, including Kim Ki-nam, the head of Samsung Electronics Device Solutions Division attended, the presidential office said.

During the event, Minister of Trade, Industry and Energy Moon Sung-wook introduced a detailed road map, dubbed “The vision and strategy for great transformation of carbon-neutrality in industries, energy sector.”

Under the road map, the government will work to replace coal-based energy with cleaner sources, and phase out 24 coal power plants that are old, the 2034, as the country plans to completely stop coal plant operations in 2050.

As for other coal plants with longer lifespans, the minister said the government would persuade the operators to close them early.

The country would also push for speedy commercialization of new technologies that can employ new materials such as ammonia and hydrogen.

The government would also develop more efficient licensing systems for fast distribution of renewable energies, such as solar and wind power, while keeping extra care to reinforce infrastructures to maintain the supply of traditional fuel sources for energy security.

The road map also contains plans for a complete reform in research and development sectors of industries, and to secure the technologies needed to decarbonize the steelmaking process.

The minister said he expects the main industries of the country would change quickly to revolve around environment-friendly and high value items, reorganize themselves to manufacture products with increasing value, while reducing carbon emissions.

After the minister’s presentation, the president and participants from companies held discussions on related topics, including carbon-neutrality strategies for large emitters, and on fostering new business sectors.