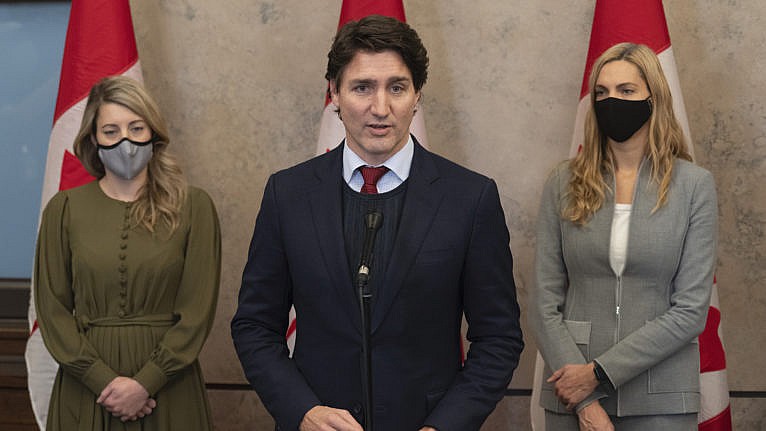 Olympic chill: Canada has joined a growing list of Western countries refusing to send diplomats to the 2022 Winter Olympics in Beijing to protest China’s treatment of minorities in Xinjiang and its crackdown on civil liberties in Hong Kong, the Globe reports.

Justin Trudeau announced Wednesday that no government officials will be present at the event, which runs February 4 to February 20.

“We are extremely concerned by the repeated human rights violations [of] the Chinese government,” Mr. Trudeau told reporters Wednesday. “That is why we are announcing today that we will not be sending any diplomatic representation to the Beijing Olympic and Paralympic Games this winter.”

The United States, United Kingdom, Australia, New Zealand and Lithuania have already announced their own diplomatic boycotts of the Beijing Olympics. A diplomatic boycott doesn’t amount to a full boycott and Canadian athletes will still represent Canada at the 24th Olympic Winter Games.

Canada’s (un)diplomatic corps: In Maclean’s, Paul Wells ponders the prime minister’s unusually enthusiastic praise for outgoing ambassadors, and considers what it might mean for diplomatic vacancies.

Work, dedication and service are table stakes for any number of dozens of Canadian diplomats, and very few of them get public high-fives from the big guy on their way out. It’s hard to shake the suspicion that what Trudeau liked most about these ambassadors was simply that he already knew them before they submitted their diplomatic credentials.

Pressure on Singh: Three NDP MPs have endorsed a petition calling on Jagmeet Singh to demand that the B.C. NDP government and Ottawa pull RCMP officers out of Wet’suwet’en territory, CBC reports.

The move places Singh in a difficult position — jammed between the wishes of many NDP members and his political need to avoid criticizing the only NDP government in the country. In November, the RCMP arrested at least 29 people, including a Wet’suwet’en hereditary chief’s daughter and two journalists, for breach of a B.C. Supreme Court injunction preventing any obstruction of work on the Coastal GasLink pipeline. The $6.6 billion pipeline is designed to carry natural gas, obtained by hydraulic fracturing — also known as fracking — in northeastern B.C., to a $40-billion LNG terminal on the province’s North Coast for export to Asia.

Grass roots: The pressure on Singh appears to be a grass roots movement, the Star reports.

At least 25 federal NDP riding associations, three MPs and several former candidates have now signed a statement circulating online to express “distress” with the federal NDP’s response to the situation. These include climate campaigner Avi Lewis, who ran for the NDP this year on the B.C. coast, as well as former NDP MP Romeo Saganash, and current MPs Leah Gazan, Lori Idlout and Matthew Green.

No deal on docs: The Conservatives have rejected a proposed compromise to resolve a long-running dispute over the disclosure of secret documents related to the firing of two scientists, CP reports. Last week, government House leader Mark Holland proposed a special all-party committee review the documents but Conservative House leader Gerard Deltell said Wednesday the government’s proposal is unacceptable.

He pointed out that in the previous parliamentary session the Public Health Agency of Canada ignored multiple orders from a Commons committee and the House itself to produce unredacted documents that could shed light on the firing of scientists Xiangguo Qiu and her husband, Keding Cheng. “The will of Parliament is clear and that has not changed,” Deltell told the Commons.

Fragile neighbours: The Americans are holding a summit of democracies this week as alarm bells are ringing in the United States about threats to that system in that country, writes Susan Delacourt in the Star.  Justin Trudeau will take the opportunity, she says, to point to the danger of cynicism and the importance of trust.

Trudeau himself has talked about the threats to democracy as a problem with roots in cynicism — a belief that everything the government does is either corrupt or incompetent or both. When people don’t believe that government delivers, they lose faith not just in government, but the delivery system itself — democracy. His summit remarks will touch on this theme, officials say.

In the Globe, Lawrence Martin writes that it is an opportunity for “Canada to showcase its democratic stature,” which is healthier than our neighbours because of the good sense of Canadians.

It’s not the politicians who deserve credit for the relative health of the system but rather the character of the Canadian people. Through history it has been their reliably good judgment, their sense of moderation and fairness that has nurtured and sustained the country’s democratic wellbeing. In this mammoth, complex country born of compromise, not revolution, the people from day one have stayed the middle course, spurning the ideologies of right or left.

Ford family drama: Speaking of good sense, Robyn Urback, in the Globe, notes that the media has so far avoided writing about Doug Ford’s daughter, Krista, because her views didn’t have much to do with her father’s.

That changed Monday night, when she appeared at The Christian Fight for Freedom alongside her husband. The $5-a-head event, which included several participants who spoke out against vaccine and mask mandates, advertised special guests “Dave and Krista Haynes, family of the premier Doug Ford,” as well as former Ford ally Charles McVety, who joked onstage about Ms. Haynes running for premier. The draw for the event was not a special appearance by a random Instagrammer, but by someone with a literal seat at Mr. Ford’s dinner table.