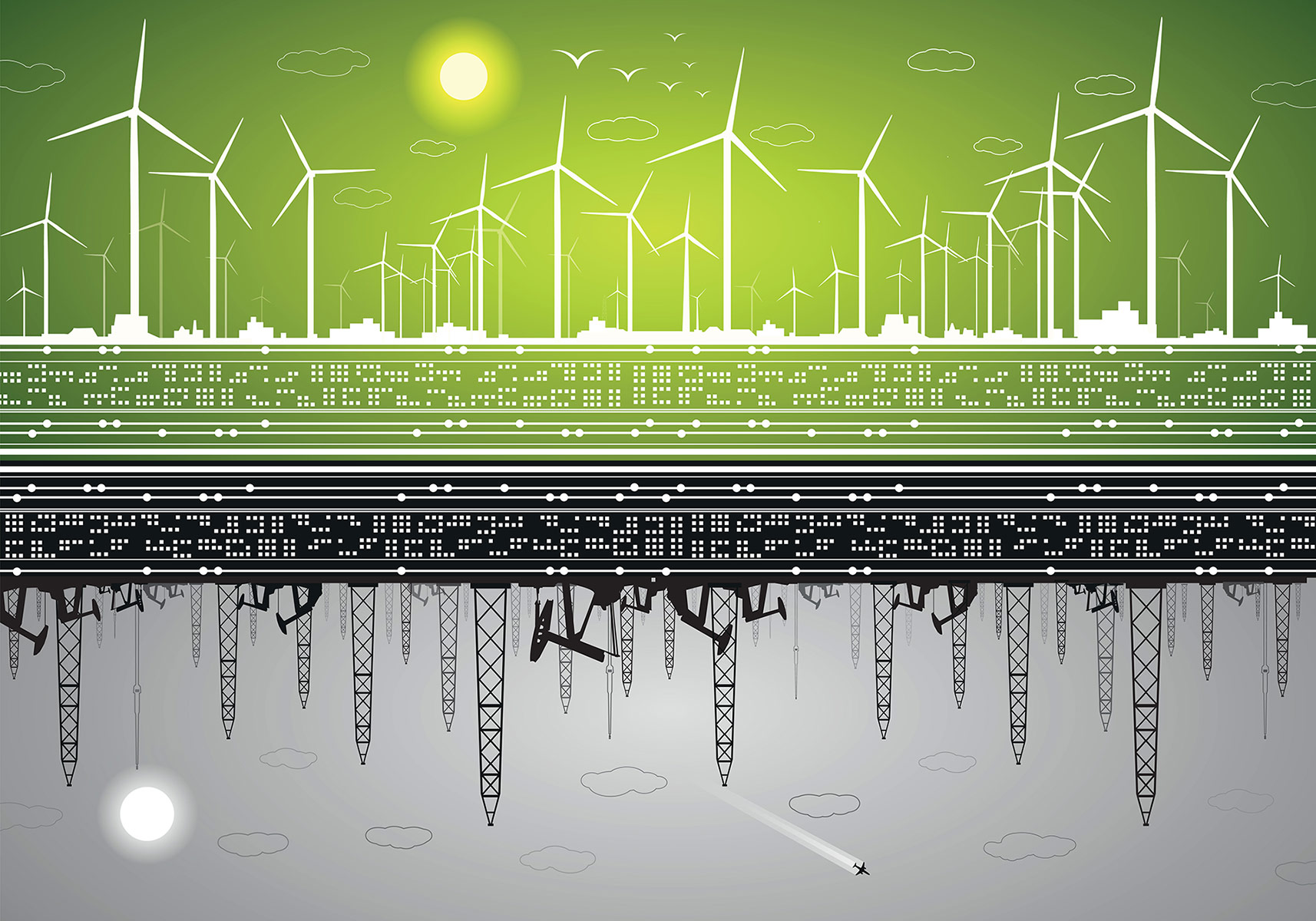 Take a look at the suited people at COP26. Some look inquisitively around as the bill is slipped across the table to them. Others pull out the inside of their empty pockets and shrug their shoulders. Some recall past promises and claim they are still owed money. Others point to someone else’s swelling accounts and insist they have paid more than their fair share.

Money, money, money. Why is it always about money?

What No One Wants to Hear About Growth

Finance has always been a key issue at the UN’s Conferences of the Parties, and a sticky one at that. In this sense, COP26, held in Glasgow, Scotland, in November, was no different. Climate finance is key because it cuts across all other issues. It is required for mitigation efforts such as expanding renewable energy production; for adaptation efforts such as introducing early warning systems and constructing flood barriers; and, some suggest, it is now also required to pay for the loss and damage caused by climate change, such as destroyed infrastructure and soil rendered infertile by floods or drought.

One of the big things to come out of COP26 was the Glasgow Financial Alliance for Net Zero. GFANZ — also referred to as the Carney initiative, after its chair, the former head of the Bank of England Mark Carney — that aims to align private capital with science-based targets to finance the investment in a net-zero economy. Representing over 450 major financial institutions, GFANZ claims to mobilize a staggering $130 trillion toward a net-zero future. This is an unbelievable number, mening that GFANZ can make a real difference if it succeeds in changing the direction of such vast monetary flows.

Kelly Clark, director of Finance & Capital Market Transformation at The Laudes Foundation, could not hide her excitement: “The entire financial system has, in theory, accepted that there is a higher purpose for them … I think we should take a little breath here and celebrate this amazing, amazing new world that we are in.”

Not everyone shares Clark’s optimism. Concerns have been raised over the fact that the $130-trillion figure is misleading because it contains double accounting, does not represent new, allocatable money, and that the initiative leaves open significant loopholes for greenwashing while overestimating the role of private finance.

If we follow Clark’s advice and take a little breath, we will hear our high school physics teacher reminding us that the climate does not respond to signals but only to actual emission reductions. If we venture further and take a second breath, we can recall that the history of COP is full of good intentions and signaling that never translated into actual emission reductions. A third deep breath allows us to remember that our previous experiments with big market-based carbon-offset schemes were largely unsuccessful, such as the Clean Development Mechanism that had “fundamental flaws in terms of overall environmental integrity.”

While GFANZ is surely an interesting initiative to follow because of its potential to move a lot of money in the right direction while giving civil society a specific framework within which it can hold the companies who commit to the scheme accountable, Clark’s celebration of an “amazing, amazing new world” is much too premature.

COP26 started with the acknowledgment of the failure by the developed countries to fulfill this promise in time. Now not expected to be delivered until 2023, this tested the trust between wealthier and poorer nations. However, there is now an agreement to come up with new and larger finance goals to go into effect after 2025 and to dedicate a team of technical experts and ministers to see these through. A post-2025 climate finance goal, with a floor of $100 billion annually, is expected to be set by 2024.

Even though it is obviously problematic that wealthier nations failed to mobilize the $100 billion they promised by 2020, an arguably bigger issue than the exact quantity of climate finance is the quality of it. In 2020, Oxfam assessed that around 80% of public climate finance is provided in the form of loans and other non-grant instruments, and that climate-specific net assistance may be five times lower than reported by developed nations. This is largely because developed countries often count the full amount of loans at face value and classify funding for projects that have limited or no relevance to environmental issues as climate finance.

This means that a lot of the climate finance counted in the $100-billion goal is de facto inaccessible to those who need it. Janine Felson, the lead on finance for the Alliance of Small Island States (AOSIS), told Carbon Brief that the credibility of the Paris Agreement relies on climate finance being scaled up and being predictable, accessible and grants-based.

One reason for these transparency issues is that there currently is no multilaterally agreed definition of climate finance. While developing countries have called for a clear designation of the term in order to improve transparency, the US and the EU strongly opposed the idea.

To deal with compensation, AOSIS suggested establishing a Glasgow Loss and Damage Facility to provide the required short-term finance. The facility would be in addition to the $100-billion promise, which is earmarked for mitigation and adaptation. Although the suggestion was supported by G77 + China, strong opposition from the EU, the US and the UK, historically the largest global emitters, meant that the mechanism was not established.

There is no doubt that developed countries have an obligation to deliver on the climate finance promises they have made. Not least because they have agreed to implement the Paris accords in a way that reflects equity and to carry the larger share of the burden by acting in accordance with the principle of “common but differentiated responsibilities and respective capabilities.”

If we consider that developed nations both have a historical responsibility for causing climate change as well as current per capita emissions that far exceed the global carbon budget for 2°C, let alone 1.5°C, they have a second and, at least as important, obligation to bring their own emissions down to levels that reflect an equitable distribution of the remaining carbon budget.

There is a strong coupling between GDP growth and greenhouse gas emissions. Regardless of how much climate finance the developed nations had managed to mobilize by 2020, how much it will mobilize by 2025 and how much they agree to mobilize after 2025, this is an issue we will have to face. We can do this with a sense of optimism and excitement because it is, indeed, possible to create better lives in an economy that is not growing — as long as we plan for it.

There are at least two issues with seeing GDP growth as a desirable end in itself. First, GDP is a general measure of economic activity that doesn’t distinguish between different types or qualities of that activity. Weapons production, oil spill clean-ups and forest clearing, for example, all increase GDP. Simon Kuznets, the inventor of the GDP measure, warned us already in the 1930s that GDP should not be used as an indicator of social progress or as a measure of human welfare as the only thing it measures is economic activity, both good and bad.

Second, if the global economy grows 2.5% per year, it will double by 2050. It is difficult enough to decarbonize all economic activity at current levels; decarbonizing an economy twice the size is going to make it a hell of a lot more difficult.

This is why we get ideas like green growth that rely on the notion of absolute decoupling. The key point is that we can keep growing the economy in a sustainable way because we can decouple economic output from the environmental impacts in a way that is global, permanent, equitable and rapid. There is, however, no empirical indications that this is happening or is even possible within any meaningful timeframe, making green growth a very risky strategy.

Part of the problem is our reliance on speculative negative emission technologies. NETs are politically useful to artificially inflate the size of our current carbon budgets because we assume that future generations can remove that carbon again. However, since these technologies only have “limited realistic potential” to remove carbon from the atmosphere, we are kicking the problems down the line to future generations and to other parts of the world that are going to suffer from climate change.

It is “an unjust and high-stakes gamble” by the developed nations — who have high levels of income and exceedingly high emissions per capita — to place all bets on a green growth strategy of NETs-dependent net-zero targets placed in a comfortably distant future.

Instead, developed nations ought to prepare for a post-growth world by reducing their dependence on economic growth and exploring more sufficiency-oriented strategies that respect equitable allocations of the remaining carbon budget.

Even if developed nations answer the climate finance question by, for example, mobilizing the $100 billion they promised in 2009, the economic questions remain. Should we rely so much on NETs and the idea of green growth? Can we live good lives in the wealthy parts of the world without growing the economy further? If so, how? These questions, the last one in particular, are questions we need to pursue much more seriously.

From this perspective, we can answer our initial rhetorical question by saying that it is not all just about money. It is also about our conceptions of what we call “the economy” and the ideological context it is situated within. Climate finance is not just a matter of cold cash and tangible tables with neat numbers; it is about sticky issues of intergenerational justice, about catering to very different and often conflicting interests, and about the ideological context that shapes the way we understand and approach our common problems and their possible solutions.

If we continue to rely blindly on green growth, keep our fingers crossed that absolute decoupling will, against all odds, happen at the required scale, and continue the intergenerational buck-passing by shunning the difficult questions, the chances of staying below 2°C, let alone 1.5°C, are just about net zero.