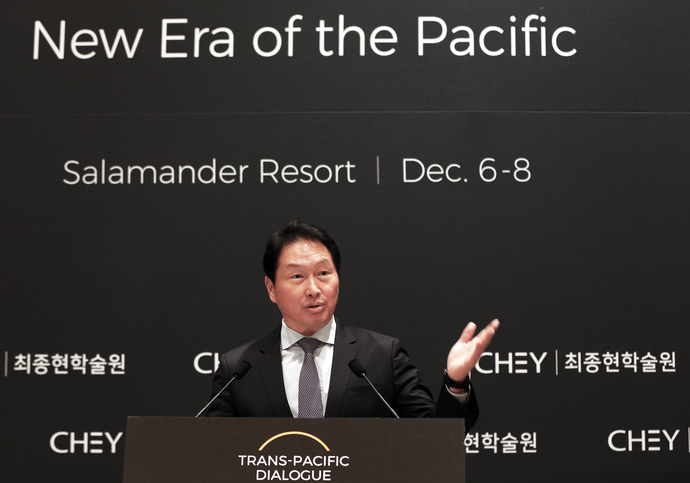 SK Group Chairman Chey Tae-won appears to have a different view on the chip business, as he emphasized “sustainability” as a prime factor to consider before making major investment decisions.

While attending 2021 Trans-Pacific Dialogue held near Washington, DC, on Tuesday, the 61-year-old leader underscored that the key of the chip business is sustainability, not size, when asked of his plan on making fresh investment in US.

“The US is a big market … but first, a study has to be made whether setting up and investing in a ‘fancy’ fab in the country is a sustainable solution,” Chey said. Fab, short for fabrication, is a factory that manufactures chips clients have designed.

Industry insiders have different interpretations of Chey’s remarks. Some say the SK Group chief is considering a chip plant in the US but in a more sustainable way — both technologically and strategically — while others suggest that he does not have plans to do so.

Yoo Hoi-jun, a professor of electrical engineering at the state-run Korea Advanced Institute of Science & Technology, says that Chey is sending a message to the US government.

“By sustainability, Chey means continuity of business. He is basically asking the US government how much subsidies it can promise,” Yoo said.

SK hynix, a chip business unit of SK Group, has been pressured by the US authorities in recent months to disclose its key chip business info. The request is widely seen as a move to prompt SK hynix to build a local chip plant in the country. Samsung Electronics, which received the same request, answered with a $17 billion chip plant in Taylor, Texas, last month.

However, other industry officials say it is highly unlikely that SK hynix will build a chip plant in the US, as an expansion project is already underway in Korea.

“Chey is indirectly saying that he will not build a new chip plant in the US, judging by the fact that he mentioned Yongin to reporters,” an industry official said.

On Tuesday, Chey was asked by reporters what he thinks about the US authorities opposing the shipment of key equipment to SK hynix’s chip factory in China. Chey answered that he would consider greater investments in Yongin, where SK hynix is scheduled to break ground on a new chip plant next year, without mentioning plans in the US.

“Conflicts between nations have an impact on the chip industry, but there’s no ‘royal road’ to solve this,” Chey said.