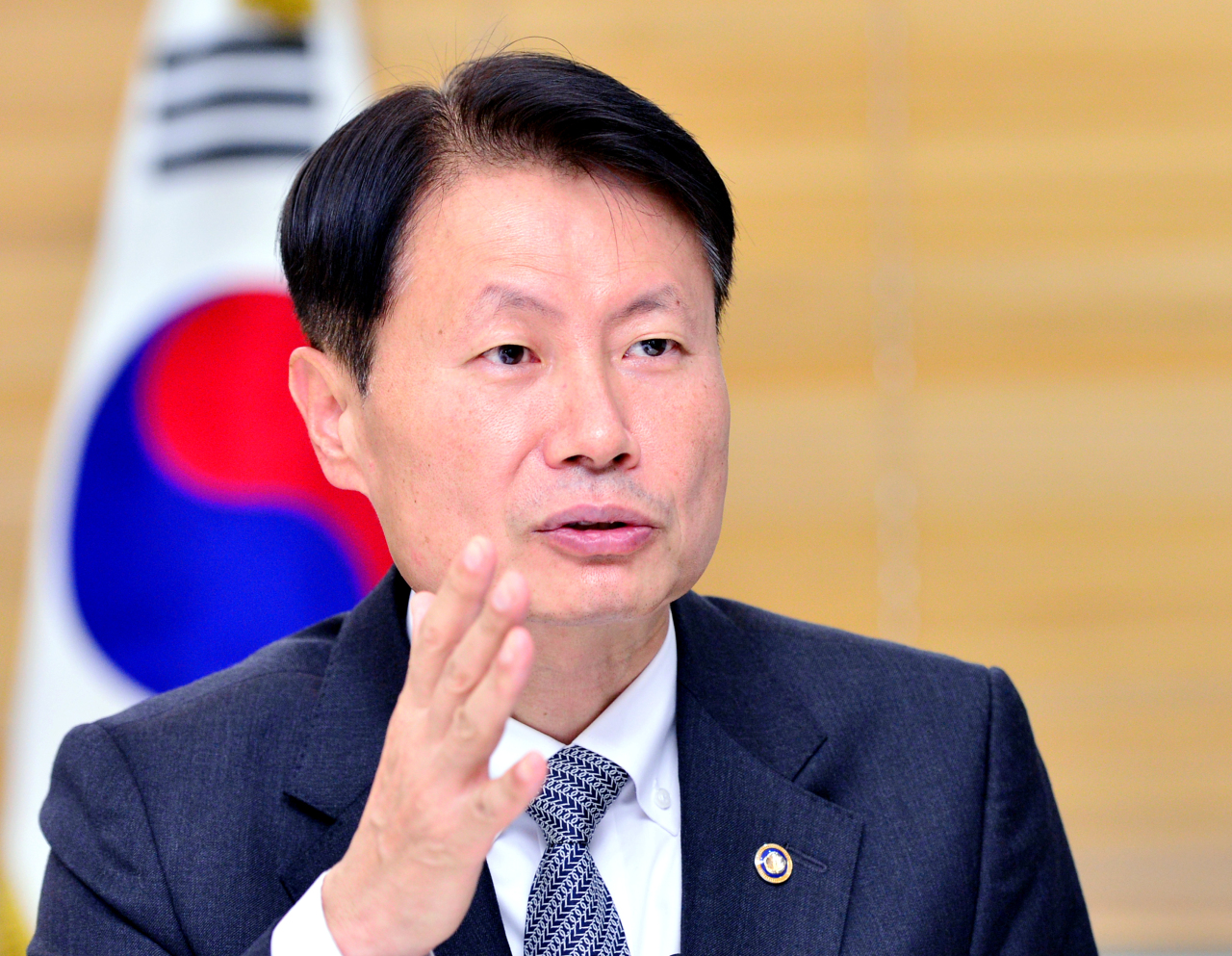 OSONG, North Chungcheong Province — South Korea’s Minister of Food and Drug Safety Kim Ganglip says his 30 years of office in public health has prepared him to serve the country during an unprecedented public health crisis. As the third pandemic year dawns and omicron darkens prospects, the minister said fresh weapons against the pandemic are coming.

The Korea Herald spoke with Kim on Monday afternoon at his office in Osong, North Chungcheong Province, about some of the most pressing COVID-19 challenges facing the country — from the new variant to drugs and vaccines for kids.

KH: What steps is the ministry taking to address the potential impact of omicron on existing diagnostics, therapeutics or vaccines?

Kim: We’re keeping a close eye on it. This is where the roles of government agencies differ, I think. The Korea Disease Control and Prevention Agency would be collecting and monitoring the initial data, for instance. As a regulatory agency we’re not as much on the front lines, per se, but rather carrying out backup tasks. So we’re in a difficult position to respond preemptively.

I will say that we’re looking into how the diagnostics that we have could evolve. The PCR tests can pick up infections with variants, but they can’t determine which variant it might be. Genomic sequencing takes at least a day or longer and costs way more than PCR tests. We’re working with companies to see if there might be a way to improve that procedure.

So far it doesn’t look like it’s going to be easy. I will tell you that we’re working actively with the disease control agency and a number of companies to see if we can come up with tests that can more efficiently distinguish which variant has caused the infection.

KH: Regeneron and Eli Lilly have said their antibody cocktails might not be as effective against omicron. Shouldn’t Celltrion’s monoclonal antibody treatment be evaluated as well?

Kim: I can’t tell you about (the Celltrion drug’s effectiveness against) delta yet, much less omicron. I can’t jump to conclusions at this point — it’d be like piling hypothesis upon hypothesis.

I’m aware there are some conjectures out there (that the drug won’t work well against omicron). But such conjectures have not always been right. When delta first came along, for example, some experts had said that as transmissible as it is, it could be less virulent. That’s not how it turned out.

So with omicron, you understand I can only be cautious about making comments. There just isn’t that much data yet. We’re not even at a point where we can run tests against it. It’s possible to make some science-based projections, but any efforts of that kind remain at best mere hypotheses at the moment.

Regkirona still not cleared for delta

KH: Celltrion’s monoclonal antibody drug regkirona — the only antibody medicine here — is being prescribed to patients in home recovery. Since the summer, delta has been the dominant strain in the country. We want to know how well it works against delta.

Kim: On that front I’m just as keen for answers as you are. That research is still in progress at another government agency. We need some time until the results are out. It’s too early to tell whether or not it’s effective against the variant. From what I know the in vivo results have been more promising than the in vitro results.

KH: Patients have been receiving regkirona since before the delta spread. Has the real-world data shown any changes in the drug’s effectiveness before and after delta began spreading?

Kim: That real-world outcome would be part of the research that is being carried out by a university team as a Korea Disease Control and Prevention Agency project. From early on I’ve pushed for the real-world results to be released as soon as possible. I’m waiting for the results just as anxiously.

KH: Regkirona’s variant data seems to be lagging. Is there a chance other antibody-based therapies may be brought in? GSK, for example, said its sotrovimab is effective against omicron.

Kim: We don’t yet have the evidence to say how (regkirona) might fare against variants. Oral pills are coming, so we’ll have another weapon against COVID-19. We might consider it if other companies apply for approval of their antibody treatments. But the question is whether they are decisively better than the Korean product that we already have.

KH: As Korea phases out restrictions, pharmaceutical interventions have become more important in combating the pandemic.

Kim: Korea has two treatments against COVID-19 under its belt — one is remdesivir and the other regdanvimab from Celltrion. Both are intravenously administered. An easily administered treatment is going to be critical in navigating this stage of the pandemic as home care becomes the default for patients with COVID-19.

One of two such products, developed by Merck, has already filed for emergency use approval with the Drug Ministry, and it’s currently under what is called a rolling review. This week an expert advisory committee meeting is taking place to discuss its safety and effectiveness.

We have yet to receive an application from Pfizer for its oral drug.

If what you want is my view, as the head of the regulatory agency, I’m cautious not to make any rash statements that may cause disruptions in the market or give false signals to health professionals working with patients.

Right now we’re closely following the emerging results. We will have to see how applications for approval come in, look at the data and then decide. There isn’t information that I can give you as we speak that may carry any implications.

KH: When will Korea have a COVID-19 vaccine approved in children under 12?

Kim: We’re still working on it. The review is underway for the data that is here, and there is data we’re still waiting to get our hands on.

Like I’ve said, when it comes to pediatric use, we cannot be too careful. Since the vaccine has been developed under a limited time frame, relatively speaking, we want to make sure all criteria are met. I understand the concerns parents might have.

I’m not saying, however, that we would be putting it off indefinitely. When enough evidence is secured to arrive at a decision, then we will make that decision. I’m afraid I’m not in a position to say yet with confidence in which direction we might be tilting.

KH: More than 91 percent of adults 18 and older in Korea are fully vaccinated. The country has some 40 million Novavax doses in its vaccine stockpile. Could Novavax’s vaccine be approved as a booster, in what would be a mix-and-match schedule, or just as a primary series?

Kim: We would need a separate set of clinical trials for approval as a third dose. If there is data to support its safety and effectiveness as a third dose, then that may be considered.

Companies are researching third vaccinations as a heterologous series, or with the same vaccine, and until the results are in, there isn’t the necessary information to base our decision on.

Irrespective of the approval from the Drug Ministry, the disease control authorities may decide to permit its use as such.

If I remember correctly, the Novavax approval application is a two-dose series.

KH: The Novavax vaccine’s purity levels have fallen short of regulator standards there, according to media reports out of the US. Will that pose hurdles for approval here? Also, how much do we know about the safety profile of the shot’s Matrix-M adjuvant?

Kim: We’re reviewing the data very thoroughly. My understanding is that it has taken Novavax longer — compared to the mRNA-type vaccines — to submit the data pertaining to the issues that you’ve mentioned.

Novavax’s vaccine may demand more rigor in terms of quality control and it may be facing some speed-related challenges in scaling up its manufacturing, but it has other features that may be valuable. For one thing, it’s developed by Novavax but it’s manufactured here. It’s based on a widely used platform. So I’m hoping it will provide an alternative for people who are hesitant to take other vaccines using more nascent platforms. It comes in a prefilled syringe, making it easier for vaccinators to handle.

The ministry would be scrutinizing all of these factors over the review process.

KH: You said in a press conference last month that the approval process for Novavax would be completed within this year. Is that still a viable timeline?

Kim: Approval is going to be a three-stage process, and it’s going to be conditional approval. We’re not even past the first stage yet, so I don’t think I can say much, but the goal is to finalize the approval process before the year is over.

KH: When do you suppose a COVID-19 vaccine developed by a Korean company will become available?

Kim: It’s too early to tell, but I think that at this point, even late June next year might be an ambitious deadline. There are a lot of variables at play.

KH: Korea’s vaccine portfolio for next year includes 10 million doses of a vaccine made by a Korean company — likely to be one from SK Bioscience. How do you reckon they may be used?

Kim: The primary task for Korea is to succeed in developing a new vaccine against COVID-19 — I think having that experience alone will be a meaningful achievement.

KH: What kind of efforts is the ministry undertaking in terms of vaccine safety surveillance, separately from the disease control agency?

Kim: No vaccine is 100 percent safe. Our responsibility is to determine if the potential risks are within the manageable range, and if the benefits, from a public health perspective, outweigh those risks that might be present. It’s a responsibility that we don’t take lightly.

If there are adverse events that are occurring consistently that warrant special attention, we inform the vaccinators and other concerned personnel. We review data being compiled here and other observations made by regulators overseas, as well as other information that is being communicated to us by the companies.

All COVID-19 vaccines being used in Korea are granted conditional approval. So they’re approved under conditions and we’re in the process of removing those conditions one by one.

KH: Do you think a verdict from the Korean Drug Ministry carries the same weight as that from regulators elsewhere?

Kim: We’re 1/36 of the FDA in the number of scientists reviewing pharmaceutical products. Our history as a ministry is still short. Surely we’ve come a long way since (the ministry’s inception) but I do believe that there is room for growth. At the end of the day our job is about protecting public health. I think the pandemic has created a societywide consensus that we need to make more progress on this front.