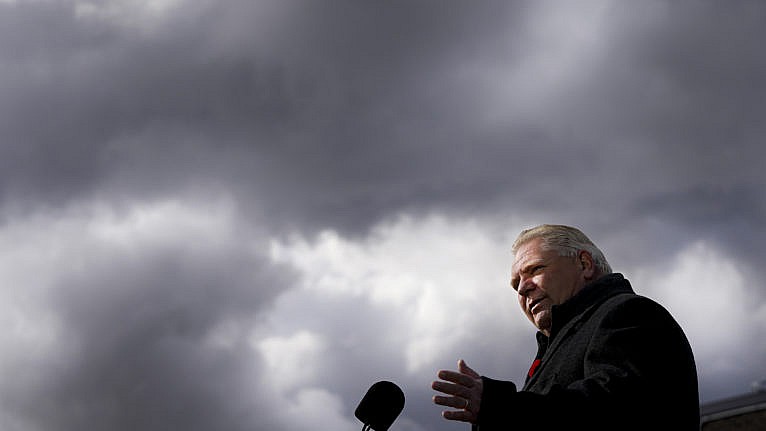 Politics Insider for Nov. 4, 2021: Parliament on the back burner; Doug Ford backs down; and Hydro-Québec gets blocked

Paul Wells, writing in Maclean’s, notes that Justin Trudeau seems to have lost interest in Marc Garneau, Bardish Chagger, Jim Carr, his caucus and Parliament, and detects a pattern.

The Prime Minister has become progressively less interested in pretending to be gregarious. And in particular, he doesn’t like Parliament and doesn’t see why he should pretend. In March 2020, three weeks into a historic lockdown, he prepared a bill that would have given the government unhindered power to raise and spend money without parliamentary oversight for two years. He backed down in the face of uproar. If he hadn’t, that carte blanche provision would still be in force. Five months later he replaced his finance minister and prorogued Parliament for a month. Seven months after that the new minister tabled the first budget in two years—the longest delay between budgets ever. Finally in August he became only the second PM in his own lifetime to call an election as leader of a minority government. The first was Stephen Harper, in 2008. He didn’t get his majority either. Trudeau’s stated reasons included that he couldn’t work with a minority Parliament. Canadians sent him back to a near-identical Parliament. One presumes his opinion of the place hasn’t changed.

No Ford mandate: Doug Ford has decided not to mandate COVID-19 vaccination for hospital workers, after all, citing the potential of staff shortages, CP reports: “I am not prepared to jeopardize the delivery of care to millions of Ontarians. Having looked at the evidence, our government has decided to maintain its flexible approach by leaving human resourcing decisions up to individual hospitals.”

Quebec backs down: Quebec is also backing away from its mandate policy for health-care workers due to staffing issues, Le Devoir reports (translation).

No dice in Maine: Voters in Maine voted about 60-40 to halt construction of a Quebec hydro line, Alexander Panetta reports for CBC, dealing a nasty blow to Hydro-Québec’s plans and New England plans to consume low-emission energy.

Known as the New England Clean Energy Corridor, the 233-kilometre project would cut a new path down through northern Maine and increase Hydro-Québec’s energy exports to the U.S. by roughly one-third by connecting to an existing line on its way to Massachusetts. It is projected to generate $10 billion US for Hydro Quebec over 20 years. Yet it crashed into clamorous resistance along the route from a consortium of unlikely allies — just as it had in an earlier ill-fated effort to cross New Hampshire.That unusual alliance seeking to stymie the project included nature-lovers and fossil fuel companies, which funded the campaign against their common hydroelectric foe.

Not good news: Writing in the Post, Colby Cosh laments the development, or the lack thereof, but allows himself some schadenfreude, but just a little.

We Albertans are very familiar with the sight of politicians reassuring us that an apparent setback for some energy transmission project is not a disaster, no sir. We have watched our leaders run through Plans B and C and D, fighting against NIMBYism and superstitious local patriotism — some of it having been brewed up, from time to time, in Quebec. I think I can report on our behalf that eventually you run out of alphabet. It’s natural for Albertan compassion to be mixed with heavy helpings of irony here. The temptation to fill an entire paragraph with “HAHAHAHAHAHA …” has been great. But, of course, the schadenfreude boomerangs on us after a moment’s thought, given that anything which is good for Quebec’s economy is bound to lift its foot off Alberta’s throat just a little.

Difficult transition: Wrapping up her coverage from Scotland of the UN climate summit, Heather Scoffield of the Star has a roundup of Canadian climate commitments, and a warning: the transition ahead will not be easy.

To be sure, the pledges and promises don’t come out of nowhere, and the economy has started adjusting. Oil and gas companies are pushing hard to find low-carbon production techniques so that they can remain viable under the new rules. Clean energy is all the rage, both for investors and government subsidies. Policy makers and the private sector have been chipping away at sustainability in the oceans and in our forests for years. And when it comes to zero-emissions vehicles, the public infrastructure and private investment for the switch are both on the upswing. But with an ever-increasing carbon price now in place, along with the stack of international pledges, the transition to a low-carbon economy is about to get very real, with all the winners and losers that entails.

Carbon trade war: In the Globe, Campbell Clark has a smart column pondering the likelihood of carbon trade wars, if leaders around the world don’t heed Trudeau’s call to put a global price on carbon.

The adoption of carbon tariffs is starting to appear inevitable. The EU is already looking at a broad Carbon Border Adjustment Mechanism, so European firms that bear the cost of decarbonization won’t be undercut by cheaper goods from countries that don’t. In theory, Canada is considering border adjustments, too, but that’s risky for a small market whose biggest trading partner is not on the same page. And the U.S. is not there yet.

Just the tax: Also in the Globe, Andrew Coyne argues that if Trudeau is sincere in his belief in the carbon tax, he should let it go to work and stop imposing other measures to reduce emissions, since they aren’t as effective.

Over the next decade, carbon pricing is projected to account for only a part of Canada’s projected reductions in greenhouse gas emissions. The rest is to be delivered by an assortment of literally hundreds of different programs, federal, provincial and municipal. The same federal document that announced, late last year, the federal carbon price would increase to $170 a tonne by 2030 (that’s good, but Sweden is already there) also contained more than 60 other initiatives – the usual mix of subsidies for this and regulations forbidding that. Some of these are probably unavoidable: pricing methane gas emissions is next to impossible, for example. But most are demonstrably less efficient or powerful than carbon pricing. That the federal government continues to champion them nevertheless is in some part due to ideology, in some larger part due to politics. But they add up.

Critic silenced: A critic of the delay, Professor Amir Attaran, was suspended by Twitter for saying Trudeau should be “tarred and feathered” over the failure to protect children, CTV reports.

Condom case: The Supreme Court heard arguments Wednesday about whether a B.C. man who allegedly ignored a woman’s request to wear a condom during sex should stand trial, CBC reports.