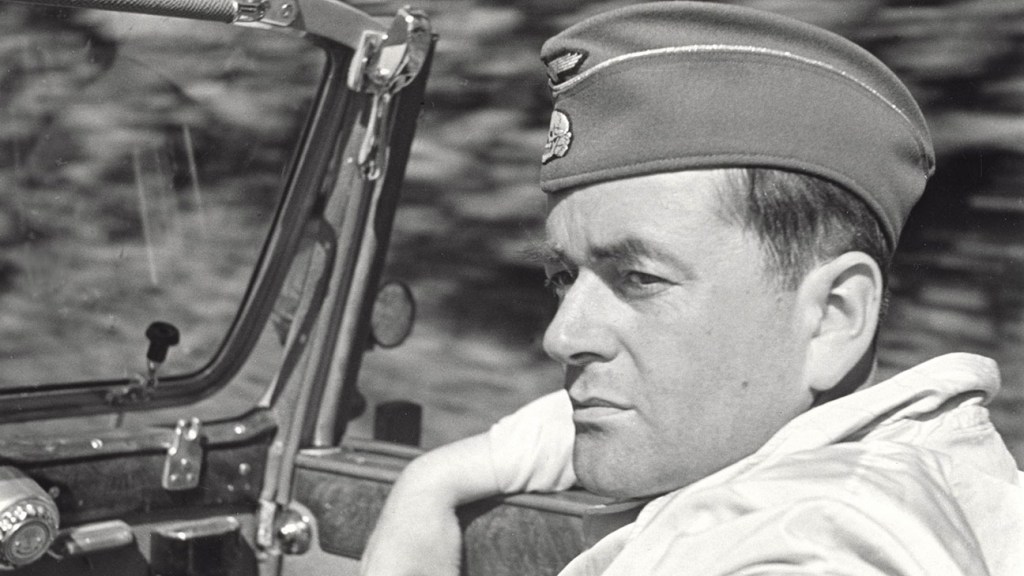 It’s not always easy to predict who among the famous and shamed will rise from the ashes of scandal. But there may be no case of reputation rehabilitation more dramatic or surreal than that of Albert Speer, the German architect who served as a key member of Hitler’s cabinet during World War II. In the Nuremberg trials, Speer escaped a sentence of execution. After 20 years in prison, he became a best-selling author and TV personality. He also came pretty darn close to receiving the big-studio bio-pic treatment.

The quietly stunning Speer Goes to Hollywood (named best documentary at the Ophir Awards, Israel’s version of the Academy Awards) opens with clips of Speer, refined and gentlemanly, charming interviewers in fluent English and French. His 1969 book, Inside the Third Reich, was an international success and he was a sought-after small-screen guest. But it’s a private conversation that’s at the core of Vanessa Lapa’s unsettling film, which is drawn entirely from archival material: a 40-hour trove of unpublished audiocassettes recorded (and preserved) by Andrew Birkin, at the time an up-and-coming screenwriter and a protégé of Stanley Kubrick and Carol Reed.

Casts a chilling light on the intersection of history and entertainment.

Birkin spent the winter of 1971 at Speer’s home in Heidelberg, Germany, working with the former Nazi on a screenplay adaptation of his memoir for Paramount. To listen to their conversations (voiced by Anno Köhler as Speer and Jeremy Portnoi as Birkin, presumably because of issues with the quality of the 50-year-old audio) is to be endlessly astounded — less so by Speer’s dissembling than by the underlying eagerness for this Hollywood “get,” as well as the two men’s mellow give-and-take as Birkin fine-tuned what was meant to be a high-gloss Hollywood project.

There’s something grimly parodic about Birkin and Speer’s discussion of casting possibilities for the movie. The screenwriter mentions the British actor Mark Burns (Death in Venice) as Speer — the protagonist with whom the audience must identify — and Speer likes the choice. Birkin notes that while Donald Pleasence is a top contender to play Hitler, there’s a sticky complication. At the time he was married to a Jewish woman, the daughter of camp survivors.

Kubrick (who in 1971 was between 2001: A Space Odyssey and A Clockwork Orange) and Reed (fresh off Oliver!) were both involved in the development of the movie, which ultimately would be scrapped. (Inside the Third Reich wouldn’t hit the screen until 1982, eight months after Speer’s death, as an ABC miniseries starring Rutger Hauer.) Kubrick is unheard from here, but he is referred to, for his insistence that the screenplay make clear that Speer knew about the extermination camps. Speer, though, coyly maintained that such knowledge eluded him. Although he headed the Ministry of Armaments and War Production and was responsible for as many as 14 million slave laborers — or, in his euphemistic parlance, “workers” — he deflected responsibility for the Nazis’ extermination policy to the Labor department that reported to him.

Alarmed by a sense of “whitewashing” in the script-in-progress, Reed (voiced by Roger Ringrose) is heard cautioning Birkin not to take Speer at face value. “He comes out of it too much as a human being?” Birkin asks at one point. But as with anyone mentoring an aspiring writer, Reed makes sure to balance his objections with positive feedback. (Birkin, who’s still working, would go on to write The Name of the Rose, Burning Secret and The Cement Garden, among other features.)

In her 2014 doc The Decent One, Lapa used archival footage for a portrait of Heinrich Himmler, the chief engineer of the Nazis’ murderous “final solution.” Here, working with co-writer and editor Joëlle Alexis, she has crafted an incisive selection from newsreels and home movies, among other sources. The images work on two levels, illustrating Speer’s view of Europe before, during and after World War II — the “not legal” Jews who entered Germany from Poland and other points east, the National Socialist Party rallies, the gatherings of Hitler’s inner circle, the Nuremberg trials — and providing a potent rebuttal to his perspective.

With a low-key combination of politesse and faux frankness, Speer offers such jaw-dropping and disingenuous observations as “It was known in Germany that a stay in a concentration camp was an unpleasant matter.” Birkin pushes back, ever so gently, and passes the buck a bit himself, telling Speer that Paramount isn’t happy to see only a couple of pages about the extermination camps in a 210-page screenplay. When Speer waxes poetic about the creation of “a painting, not a photograph” — i.e., a “movie” and not a documentary — Birkin concurs: “I don’t think the facts matter so much.” They’re voicing ideas embraced by countless artists and critics about storytelling and how best way to capture the truth, conceits that curdle in this context.

The question of how best to frame a story was central to Speer’s initial role in the party. Drawn by the personality and power he perceived in Hitler, he began as a sort of event planner and designer, and relays with pride that he enlisted an opera lighting specialist to lend visual flair to the nighttime rallies. He describes the thrill he felt when, after he’d been working for Hitler for a couple of years, the Führer invited him to lunch for the first time. In home movies at Berghof, Hitler’s vacation home in the Alps, Speer and other fawning guests jostle for position around their host.

Though the situations are by no means equivalent in terms of intention or consequences, there’s a troubling parallel in Birkin’s exchanges with the former Reich Minister. As he compares a photo of a youthful Speer to Marlon Brando or likens a plot point in the screenplay to the daring exploits of James Bond, the gracious mood masks an uneasy stew of obsequiousness, manipulation and ambition — on the part of both participants. Illuminating this strange movie-land interlude, Lapa has made a remarkable portrait of one man’s reinvention, and of compartmentalizing in hyperdrive.