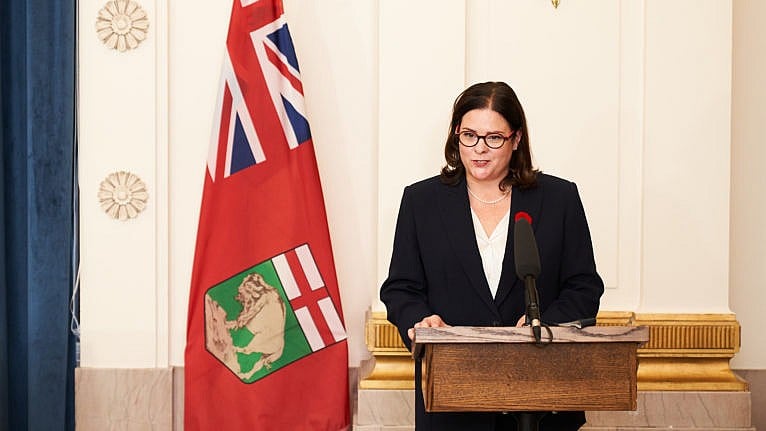 Politics Insider for Nov. 3, 2021: Heather Stefanson takes over, and her rival refuses to concede; America sends an ambassador

Heather Stefanson, Manitoba’s new premier — the first woman to hold the job — was non-committal at her first news conference after being sworn in on Tuesday, the Winnipeg Free Press reports.

At her first news conference as premier, she refused to be pinned down on key issues such as measures to combat soaring COVID-19 cases in Southern Health to specific plans for an Indigenous land acknowledgement in the legislature. She said she would consult with affected groups on a range of issues — a huge departure from Pallister’s iron grip on power.

In her first speech, Stefanson said it was once “unthinkable” for a woman to hold the job: “I reflect on the many people who have paved the way to make this possible and I promise that our government will embrace their values of equality, inclusivity and understanding.”

Stefanson, first elected in 2000, has served as justice minister and deputy premier and, during the worst of the pandemic, health minister.

Not Glover: Stefanson’s swearing in was overshadowed by the bizarre antics of Shelly Glover, who Stefanson narrowly beat in the Progressive Conservative leadership race. Glover told CBC she is the real premier. She is not, writes Josh Aldrich in the Winnipeg Sun.

Glover was busy telling any member of the media who would listen on Tuesday that she was premier, that she won the PC leadership race. Except she didn’t. The official count given by the party had her 363 votes shy of winning the leadership — which is a much closer result than most pundits suggest. This wreaks of desperation supported by innuendo and rumours of missing ballot boxes and incorrect spreadsheets.

Trudeau calls for carbon tax: At the UN climate conference in Glasgow, Justin Trudeau urged all countries to agree to a global price on carbon, CBC reports, and took credit for imposing such a tax on Canada: “It’s always been hard to do this. We know citizens want more action on climate, but are always worried that they’re going to be the ones paying for the brunt of it.”

Trudeau’s plea did not make international headlines, which were dominated by Joe Biden attacking the leaders of China and Russia for their absence, but CBC reports that Ursula von der Leyen, the president of the European Commission, praised him.

Von der Leyen, the senior-most leader of the European Union, praised Canada’s leadership on the carbon tax file, saying it follows the EU’s emissions trading system, a cap-and-trade system that was first imposed on some industries on the continent in 2005. She also stood behind Trudeau’s call for some sort of carbon-pricing regime that applies to the global economy. “It’s been proven — it helped us decouple growth from greenhouse gas emissions. So you can prosper while cutting emissions,” she said, while touting the reductions seen across the power industry in Europe, where carbon emissions are down some 45 per cent since the trading system was first implemented.

Cohen to Ottawa: The United States is sending an ambassador to Ottawa after two years, and it is not Shelly Glover. David Cohen was confirmed on Tuesday, CBC’s Alexader Panetta reports. Politico has a profile of the Philadelphia telecom executive (and political fundraiser), who sounds like an energetic person.

In an interview published earlier this month, Cohen gave Penn Today a glimpse of how he stays motivated. “People used to say to me that I don’t know how to say no, that I say yes to everything,” Cohen told the university publication. “And for two or three years, I asked my assistant to keep a list of everything I said no to. After a couple years, there were about 500 items on the list. So I argue, I do know how to say no, but I don’t say no to anything that’s important. I’ve long lived by the Ben Franklin line, that if you want something done, go find the busiest person and ask them to do it.”

Flag talks: Trudeau said Tuesday he is confident Canada will find a way to honour its war dead on Remembrance Day by lowering the flag to half-mast, CP reports.

The flag has been flying at half-mast at federal buildings since late May, after the location of what are believed to be hundreds of unmarked graves at a former residential school in Kamloops, B.C. Trudeau has suggested it would be up to Indigenous people to determine when to hoist it again. He said Tuesday that talks with Indigenous leaders and communities about the issue are ongoing and that he is optimistic about reaching the “right solution.”

Hinshaw underbussed: Jason Kenney appeared to throw Deena Hinshaw under the bus Monday night under opposition grilling about the province’s pandemic management this summer, CTV reports: “Had there been further recommendations later in August to take additional measures, I would have immediately convened a cabinet committee meeting to approve those,” said Kenney.

Hinshaw, the chief Chief Medical Officer of Health, is tasked with making recommendations to cabinet. In a statement later, Kenney said he was not blaming her.

ICYMI: BTW, if you haven’t read it yet, Jason Markusoff’s in-depth portrait of Kenney’s struggles is right here.